The Arcadia quadrangle is full of many features that were discovered with satellites which went in orbit about the planet. Ridge networks, glaciers, dust devil tracks, slope streaks, gullies, latitude dependent mantle, old river channels, and huge troughs are shown and described in this article. We have learned so much about the Red Planet in the nearly half century of study with satellites that went to Mars.

Arcadia is the name of a classical albedo feature located at 45° north latitude and 260° east longitude on Mars. The feature was named after a mountainous region in southern Greece.[3] The name was approved by the International Astronomical Union(IAU) in 1958.[4]

Large troughs (long narrow depressions) are called fossae in the geographical language used for Mars. This term is derived from Latin; therefore fossa is singular and fossae is plural.[5] Troughs form when the crust is stretched until it breaks. The stretching is from the large weight of volcanoes. Fossae/pit craters are common near volcanoes in the Tharsis and Elysium system of volcanoes.[6] A trough often has two breaks with a middle section moving down, leaving steep cliffs along the sides; such a trough is called a graben.[7] |Lake George, in northern New York State, is a lake that occupies a graben. Pit craters are often associated with graben. Pit craters do not have rims or ejecta around them, like impact craters do. Studies have found that on Mars a fault may be as deep 5 km, that is the break in the rock goes down 5 km. Moreover, the crack or fault sometimes widens or dilates. This widening causes a void to form with a relatively high volume. When surface material slides into the void, a pit crater or a pit crater chain forms. On Mars, individual pit craters can join to form chains or even to form troughs that are sometimes scalloped.[8] Other ideas have been suggested for the formation of fossae and pit craters. There is evidence that they are associated with dikes of magma. Magma might move along, under the surface, breaking the rock and more importantly melting ice. The resulting action would cause a crack to form at the surface. Pit craters are not common on Earth.[9] Knowledge of the locations and formation mechanisms of pit craters and fossae is important for the future colonization of Mars because they may be reservoirs of water.[10] Many grabens are found in the Arcadia quadrangle. Pictures below show examples of grabens (Fossa) in Arcadia.

Many places on Mars show dark streaks on steep slopes like crater walls. The youngest streaks are dark; they become lighter with age. Often they begin as a small narrow spot then widen and extend downhill for hundreds of meters. They have been seen to travel around obstacles, like boulders.[11] It is most generally accepted that they represent avalanches of dust. The streaks appear in areas covered with dust. When a thin layer of dust is removed, the underlying surface is dark. Much of the Martian surface is covered with dust. Fine dust settles out of the atmosphere covering everything. We know a lot about this dust because the solar panels of the Mars Rovers get covered with dust, thus reducing the electrical energy.[12] Dust storms are frequent, especially when the spring season begins in the southern hemisphere. At that time, Mars is 40% closer to the sun. The orbit of Mars is much more elliptical then the Earth's. That is the difference between the farthest point from the sun and the closest point to the sun is very great for Mars, but very little for the Earth. Also, every few years, the entire planet is engulfed in a global dust storm. When NASA's Mariner 9 craft arrived there, nothing could be seen through the storm.[13] [14] Other global dust storms have also been observed, since that time. Research, published in January 2012 in Icarus, found that dark streaks were initiated by airblasts from meteorites traveling at supersonic speeds. The team of scientists was led by Kaylan Burleigh, an undergraduate at the University of Arizona. After counting some 65,000 dark streaks around the impact site of a group of 5 new craters, the team saw clear patterns. The number of streaks was greatest closer to the impact site. So, the impact somehow probably caused the streaks. Also, the distribution of the streaks formed a pattern with two wings extending from the impact site. The curved wings resembled scimitars, curved knives. This pattern suggests that an interaction of airblasts from the group of meteorites shook dust loose enough to start dust avalanches that formed the many dark streaks. At first it was thought that the shaking of the ground from the impact caused the dust avalanches, but if that was the case the dark streaks would have been arranged symmetrically around the impacts, rather than being concentrated into curved shapes.[15] [16] Dark streaks can be seen in the image below that was taken by HiRISE.

Some excellent examples of Martian gullies are found in the arcadia quadrangle. Gullies occur on steep slopes, especially on the walls of craters. Gullies are believed to be relatively young because they have few, if any, craters. Moreover, they lie on top of sand dunes which themselves are considered to be quite young. Usually, each gully has an alcove, channel, and apron.[17] Gullies were once thought to be caused by recent flowing water. However, with further extensive observations with HiRISE, it was found that many are forming/changing today, even though liquid water cannot exist under current Martian conditions. Faced with these new observations, scientists came up with other ideas to explain them. The consensus seems to be that although water may have helped form them in the past, today they are being produced by chunks of dry ice moving down steep slopes. [18] [19] [20] Repeated observations of gullies that were changing today revealed that they changing in the season when dry ice would most likely be breaking up and moving down slopes. The movement would be aided by carbon dioxide lifting/lubricating the chunks of dry ice

Much of the surface of Mars is covered by a thick smooth mantle that is thought to be a mixture of ice and dust. This ice-rich mantle, a few yards thick, makes the surface look very smooth. Because there are few craters on this mantle, the mantle is relatively young. Mantle falls from the air during certain climates. Changes in Mars's orbit and tilt cause significant changes in the distribution of water ice from Polar Regions down to latitudes equivalent to Texas. During certain climate periods, water vapor leaves polar ice and enters the atmosphere. The water returns to the ground at lower latitudes as deposits of frost or snow mixed generously with dust. The atmosphere of Mars contains a great deal of fine dust particles. Water vapor condenses or freezes on the particles, and then they fall down to the ground due to the additional weight of the water/ice coating. When ice at the top of the mantling layer goes back into the atmosphere, it leaves behind dust, which insulates the remaining ice.

Glaciers, loosely defined as patches of currently or recently flowing ice, are thought to be present across large areas of the modern Martian surface, and would have been more widely distributed at times in the past.[21] [22] Lobate convex features on the surface known as viscous flow features and lobate debris aprons regarded as true glaciers.[23] [24] [25] [26] [27] [28] [29] [30]

Many places on Mars show channels of different sizes. Many of these channels probably carried water, at least for a time. The climate of Mars may have been such in the past that water ran on its surface.

Dipping groups of layers along slopes, especially along crater walls are believed to be the remains of a once widespread material that has mostly been eroded away.[31] 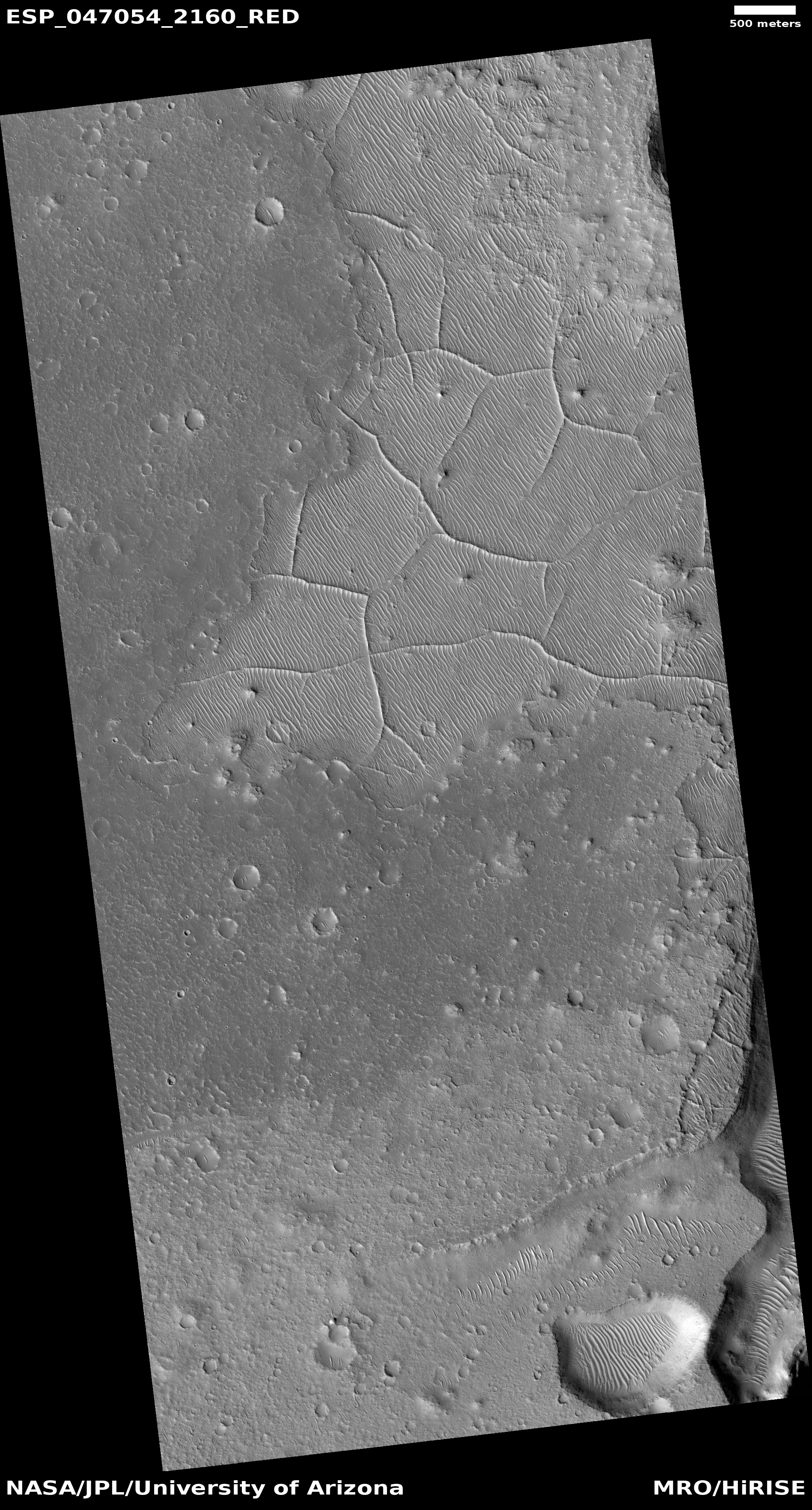 Linear ridge networks are found in various places on Mars in and around craters.[32] These features have also been called "polygonal ridge networks," "boxwork ridges", and "reticulate ridges."[33] Ridges often appear as mostly straight segments that intersect in a lattice-like manner. They are hundreds of meters long, tens of meters high, and several meters wide. One popular idea for their formation is that impacts created fractures in the surface, these fractures later acted as channels for fluids. Fluids became hard. With the passage of time, surrounding material was eroded away, thereby leaving hard ridges behind. However, we do not yet agree on the exact cause.

Many places on Mars show rocks arranged in layers. Rock can form layers in a variety of ways. Volcanoes, wind, or water can produce layers.[34] A detailed discussion of layering with many Martian examples can be found in Sedimentary Geology of Mars.[35]

Other Features in the Arcadia quadrangle