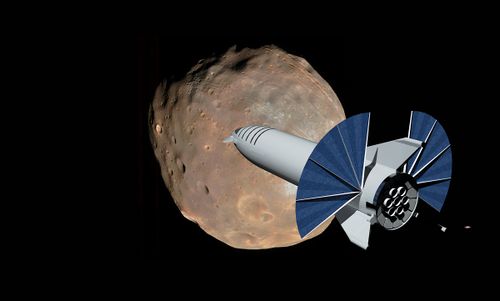 The moon Phobos will eventually break up into a planetary ring around Mars. But what about when future colonists start to Terraform Mars? This would increase the density and height of the atmosphere substantially, possibly causing air friction on Phobos? Moreover, this moon is an obstacle for building a space elevator. Therefore, a vital step to prepare Mars for colonization could be the Bringing down of Phobos.

Collision with an asteroid

With a small amount of fuel it might be possible to accelerate a small object from the asteroid belt toward Mars. The trajectory would be controlled by maneuvering rockets during the journey. It would end in a collision with Phobos in an appropriate angle in order to reduce orbital speed of Phobos, which would finally result in Phobos crashing onto the surface of Mars.

Once the potential threat is over, the future colonists will no longer have to fear a falling moon and can thrive.

The technology of crashing an asteroid into a potentially dangerous cosmic body may be useful for repelling threats from Earth. The knowledge from this Phobos project could be valuable far beyond the Mars colonization.

The crash would have a global impact on Mars' atmosphere and climate. Dust that is evaporated into the atmosphere would temporarily reduce the sunlight on the surface. On the other hand, a huge amount of water steam would cause a greenhouse effect in medium-term, which would increase the planet's temperature over a couple of years.

The location of the crash would be important. For example, a crash into one of the poles might release more water vapor as well as carbon dioxide into the Martian atmosphere than a crash elsewhere on Mars.

Moreover, the impact would reveal lots of data about the geological structure of Mars. Seismic sensors could be used to analyze the Martian layer structure down to the core. With spectroscopic methods the chemical substances of the impact area can be analyzed.

Millennia will pass until Phobos becomes a real threat. Mankind will possibly develop more powerful technology to be able to pull Phobos up to a higher orbit. This could be done either with a series of small asteroid impacts, huge sunlight-reflecting mirrors, or a gravitational tractor.

Also, a catapult could be built on Phobos with the ability to throw pieces of the rubble pile towards Mars. This would produce an impulse to lift Phobos to a higher orbit. The angle could be optimized to both maximize the impulse and avoid smashing facilities on the Martian surface.