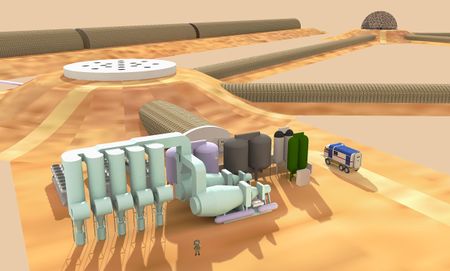 An hypothetical atmospheric separation plant. This might use distillation or chemical absorption to separate Mars' atmosphere into its component gases.

Distillation is the use of evaporation followed by condensation to concentrate chemicals from a mixture or to remove impurities from a liquid.

Distillation differs from fractional crystallization, zone melt refining and zone freeze refining. An example of fractional crystallization is cooling a mixture of ethanol and water to below the freezing point of water but above the freezing point of alcohol. Some of the water turns into ice and is separated. Melting the ice gives one mixture that is higher in water than the original while the unfrozen liquid is higher in ethanol.

Similarly, an oil refinery heats crude oil so that some of the contents evaporate while others stay liquid. Doing this in multiple steps, one can separate it into a number of components such as diesel fuel, petroleum/gasoline or kerosene.

Since yeast can not be used to produce ethanol in concentrations beyond that which kills the yeast, and since such concentrations have significant medical use, a self-sufficient colony would need to distill it.

On Mars a colony would distill the atmosphere into one fraction, a mixture of nitrogen and argon, and another fraction of carbon dioxide. Both fractions would be useful.