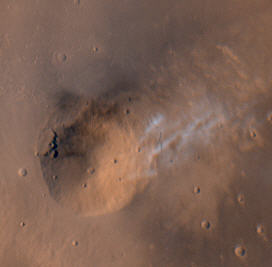 Hecates Tholus is a volcano in the Elysium Volcanic Region. 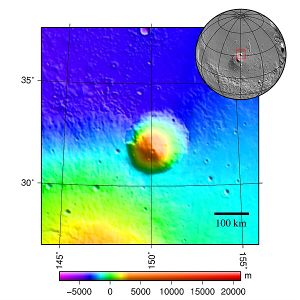 In planetary nomenclature, a "tholus" is a "small domical mountain or hill". Hecates is named after Hecate, the goddess of the ghost-world, nightly events, and sorcery.[2]

It is thought that the caldera may have had glaciers in the past.[3] Some valleys on Hecates show a parallel drainage pattern.[4] Using the High Resolution Stereo Camera onboard ESA's Mars Express that is orbiting Mars, a team of researchers discovered evidence of a large explosive eruption and recent glaciers on the volcano. Although some of the ice has sublimated into the atmosphere, the authors believe there still exists ice under a cover of debris. They state the ice could be "accessible for automated or human exploration."[5] On Earth 8 million year old ice is still present in the Antarctic dry valleys under a layer of dirt.[6]