Difference between revisions of "Meteorites"

A meteorite is a body of space debris that enters the atmosphere of a planet and survives the friction with surrounding atmospheric gases to impact the surface energetically. Impact causes planetary cratering, ejecta and dust (forming a layer of regolith on planets with low geological activity such as Mars). This poses an obvious risk to a Martian settlement, and due to the tenuous atmosphere of Mars, smaller debris have the greater chance to impact the surface.

Small meteoroids are best handled by a thick layer or regolith. Mars One plans to cover the inflatable greenhouses with at least 2 meters of it. Most meteoroids are small ones. Also, self-healing puncture protection for space suits and houses should be installed.

Bigger meteoroids are not so frequent, but they can happen. Meteoroids of the size of a few centimeters are absolutely fatal. Nothings can be done to fend them off. The kinetic energy is way too much.

And yet, there are possible precautions. One is to modularize the settlement with redundant facilities on different places. In the case of a hit, the affected module may be destroyed, but the remaining parts allow the surviving settlers to continue the colonization.

For even bigger impacts the needed distances between the redundant modules must be larger. When the settlement reaches 20 persons, a second settlement may be built, dividing the colony in two parts, with a distance of a few hundred meters. Those two settlements should be equipped to work independently from each other, but cables and pipes between them help to support each other in emergency situations, e.g. to supply oxygen and electricity. A railroad between them allows material and person transport. 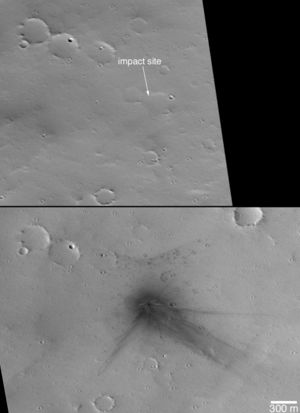