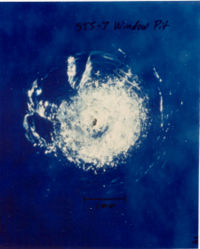 Close-up image of damage caused to by small orbital debris to a window on Space Shuttle Challenger (STS-007, June 18, 1983).

Orbital debris poses a serious threat to any spacecraft exiting or entering the orbit of Earth. Originating from human activity in space, orbital debris can cause significant damage to spacecraft and endangers manned missions. According to the NASA Orbital Debris Program Office,[1]

"Approximately 11,000 objects larger than 10 cm are known to exist. The estimated population of particles between 1 and 10 cm in diameter is greater than 100,000. The number of particles smaller than 1 cm probably exceeds tens of millions... In low Earth orbit (below 2,000 km), orbital debris circle the Earth at speeds of 7 to 8 km/s. However, the average impact speed of orbital debris with another space object will be approximately 10 km/s. Consequently, collisions with even a small piece of debris will involve considerable energy."

It is therefore essential that the most damaging particles/small bodies of debris are tracked efficiently. On Earth, several institutions are responsible for tracking and modeling the size and trajectory of space debris, notably, the NASA Orbital Debris Program (ODP) safeguards missions such as the Space Shuttle and International Space Station. Manned orbital missions are very rarely under threat from orbital debris in Earth orbit, but the ODP will warn missions to avoid debris that has a 1 in 10,000 chance of collision. This can occur once every one or two years.

Space debris is a result of explosions, collisions or decay of space missions in Earth's orbit. Flecks of paint peeling from an old rocket to defunct satellites, all debris can stay in Earth's orbit for decades, even centuries (depending on the altitude of orbit).

As missions to Mars increase in regularity, and more observatories are inserted into Martian orbit, space debris population around the Red Planet will increase. Therefore, mission scientists need to carefully plan the design of launch vehicles (from the Martian surface) and optimize orbiters so the odds of collision with space debris for any future manned mission remain as low as possible.

Another potentially catastrophic hazard for future settlements on Mars includes the re-entry of man-made satellites and larger debris. We are lucky on Earth in that we have a dense atmosphere to facilitate the frictional burn and break up of meteors, meteorites and space junk. Routinely, large, expired satellites are allowed to drop in their orbits until atmospheric drag slows them significantly to cause re-entry. Usually the debris is allowed to burn up over unpopulated regions of Earth (i.e. the Pacific Ocean or Australian Outback), and should any mass survive the atmospheric burn, at least minimal damage will be caused on impact. The Russian Mir Space Station was disposed of in this way in 2001.[2] Mars however has an atmosphere 1/100th as dense as Earth, greatly increasing the risk of impact with manned settlements on the surface.