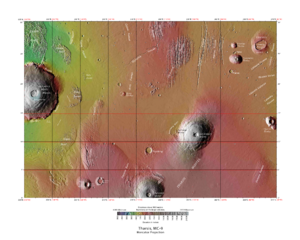 Tharsis quadrangle map showing most of volcanoes of Tharsis

Tharsis is a huge volcanic plateau in the western hemisphere near the equator of Mars. It covers almost 25 % of the surface of the planet.[1] Tharsis is sometimes called the Tharsis Bulge, Tharsis Rise, or the Tharsis Dome. [2] Officially, "Tharsis" is an albedo feature.[3] The region contains the largest volcanoes in the Solar System, which includes three enormous shield volcanoes: Arsia Mons, Pavonis Mons, and Ascraeus Mons. They are known as the Tharsis Montes. Although these three look small as compared to Olympus Mons, one, Ascraeus Mons is about twice the height of Pikes Peak and almost as high as Mount Everest.[4] Olympus Mons, the tallest volcano on the planet, is often associated with the Tharsis region, however, it is actually located off the western edge of the plateau. Noctis Labyrinthus and the western part of Valles Marineris cut through the middle of Tharsis. Alba Patera is old and low in elevation, but it has the most area of any Martian volcano. Pavonis Mons can serve as a marker for location, as it is very prominent and sits almost directly on the equator. Find Pavonis and you have found the equator. The name Tharsis is the Greco-Latin of the biblical Tarshish, the land at the western extremity of the known world.[5] [6] 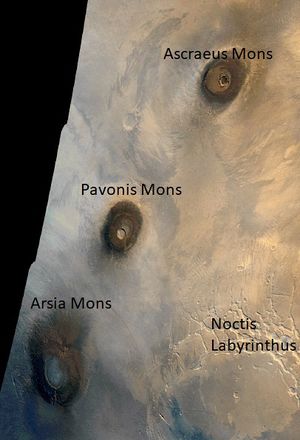 Tharsis features, as seen by Viking 1 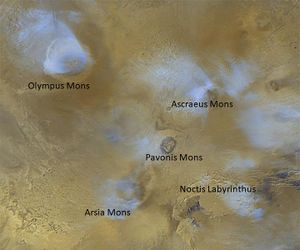 Volcanoes in the Tharsis region are believed to be constructed of the volcanic rock basalt.[7] Basalt is rich in iron and magnesium (mafic)minerals and typically dark in color. It is a very fluid lava so the flows travel long distances and do not make steep volcanoes. Volcanoes of basaltic composition look like shields sitting on the ground. Volcanoes on Mars are able to grow many times larger than those on the Earth because Mars has experienced very little, if any, plate tectonics. Lava from a stationary hot spot is able to accumulate at one location for a billion years or longer. If magma and lava behaves on Mars the way it does on Earth much of the magma (liquid rock under the surface) does not erupt at the surface as lava, rather it never reaches the surface before cooling; hence, it forms large intrusive rock complexes, such as sills and laccoliths, that can cause a general doming and fracturing of the overlying crust. In other words, most of the once liquid rock of Tharsis probably never made it to the surface.[8]

The great mass of Tharsis volcanoes has stretched the crust and caused it to crack in places to form long troughs, called fossae. Some extend half way across the planet.[9] Sometimes lava, and maybe even water, can flow from these fossae. When lava erupts, it throws out liquid rock, but it also releases enormous amounts of gas like water and carbon dioxide. So when Tharsis volcanoes were erupting, they may have caused the atmosphere to become thicker and warmer. One study, calculated that the Tharsis bulge contains around 300 million cubic km of igneous rock. If this magma contained carbon dioxide and water vapor in percentages similar to that observed in Hawaiian basaltic lava, then the total amount of gases released could have produced a 1.5-bar carbon dioxide atmosphere and a 120 meter thick layer of water that covered the whole planet. A 1.5 bar atmosphere has one and a half times the pressure of the Earth’s.[10] Gases given off in the eruptions also probably contained large amounts of sulfur and chlorine. When these elements combine with water they produce acids that can break down rocks and minerals. Gases from Tharsis together with other Martian volcanoes are likely responsible for an early period of Martian time (the Theiikian) when sulfuric acid weathering created hydrated sulfate minerals such as kieserite and gypsum that have been detected on the planet by orbiting spectroscopes.[11] Many of the gases, like carbon dioxide, from volcanoes cause global warming. Although the Martian atmosphere is now cold, thin, and dry, in the past it was probably much thicker and warmer since there is widespread evidence of rivers, streams, floods, lakes, and maybe oceans. Much of the planets’ early water has either become frozen into the ground or has escaped into space. [12] [13] [14] [15] [16] Research, reported in 2018, about when Tharsis developed, gave support to the existence of oceans. The team of scientists proposed that Martian oceans appeared very early, before or along with the growth of Tharsis. This proposal increases the chance of oceans because oceans would only need to be half as deep as had been thought. The full weight of Tharsis would have created deep basins, but if the ocean occurred before the mass of Tharsis had formed deep basins, much less water would be required. In addition, the later growth of Tharsis would have caused irregular shorelines, which is what is observed.[17] [18] Some researchers suggested that the great mass of lava in the Tharsis region caused the rotation of the planet to change, but later research cast doubt on this idea.[19] [20] [21]

Many volcanoes of various sizes are found here or closely nearby. Towards the north is Alba Mons the volcano with the largest area on the planet. Ceraunius Tholus, Uranius Tholus, Jovis Tholus, Tharsis Tholus, and Biblis Tholus may only be the tops of old volcanoes that have been mostly buried by younger lava flows; perhaps by as much as 4 km thick lava flows.[22] Other volcanoes are classified as patera. Patera display craters with scalloped edges. Patera is a Latin term meaning a shallow drinking bowl. Ulysses Patera is one such volcano in Tharsis.[23]