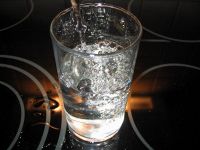 Water is a chemical compound consisting of a single oxygen atom bonded to two hydrogen atoms (chemical symbols: H2O). Clean water is essential to almost all known forms of life, and its unique properties make it invaluable for most industrial processes. While water in the liquid phase is abundant on Earth, its icy deposits on Mars make it into a critical resource to be treasured. 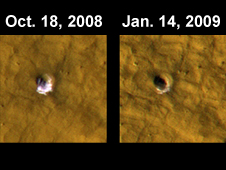 Starting in 2004, the evidence of the presence of water on Mars has been mounting. The Opportunity rover discovered geological markers - stratification and cross-bedding - near its landing site which pointed to significant flows of water at some time in Mars' history. Around the same time the Mars Express orbiter detected the spectral evidence of water present in the polar regions. In 2005, Mars Express confirmed this by locating an area of solid water ice near the north pole. The Phoenix lander confirmed the existence of water ice in Mars.

Photos from the Mars Reconnaissance Orbiter show frozen water just below the Martian surface (see photograph). Surprisingly the location is far away from the poles (43.28 degrees north latitude, 164.22 degrees east longitude), which raises the hope of large amounts of water all over the planet. [1] 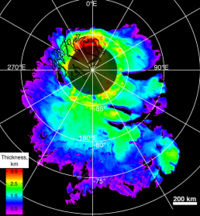 The Mars Global Surveyor arrived at the Red Planet on September 11, 1997 and returned a decade of data on the evolution of the planet before it was lost in November 2006 through energy loss. It was Mars' longest operational artificial satellite. The Mars Orbiter Camera (MOC) onboard revealed new deposits possibly carried as sediment by flowing water in two locations in the past 7 years (press release dated December 6, 2006)[2]. In images taken in August 1999 and September 2006 of the same location (Centauri Montes Region), a bright deposit measuring several hundred meters long is evident in the 2006 image but not in the 1999 image. A similar feature was observed at a different location from 2001 to 2005 at Terra Sirenum. It is worth noting that both locations are in equatorial regions, not usually associated with ice or liquid water. This suggests liquid water remains a characteristic of the Mars landscape, if only sporadically. These discoveries have increased the enthusiasm for the search for microbial life, but the implications for manned exploration are huge. If there are pockets of liquid water just below the surface, Mars may yet be able to provide our future pioneers with natural springs more familiar on Earth.

Although there may be other explanations for these long "channels" of sediment, such as rock slides or wind-blown sand features, the appearance of the deposits seem very water-like. Michael Malin of Malin Space Science Systems, a mission scientist for the MOC says, "The shapes of these deposits are what you would expect to see if the material were carried by flowing water... they have finger-like branches at the downhill end and easily diverted around small obstacles".[3] It is also possible that other liquids such as 1,2-butanediol, 1,3-butanediol, 1,2-propanediol, 1,3-propanediol, ethylene glycol and related liquids could be responsible for fluid flow features on Mars. While such liquids would be relatively more rare than water, the resistance to freezing of such liquids and mixtures of such liquids with water would allow them to cause fluid flow effects where pure liquid water is impossible.

The Martian atmosphere contains a small percentage of water. With a device similar to an air dehumidifier the production of water should be able all over the planet's surface. An experimental setup is necessary to find out all about the viability of this approach.

Since the discovery of caves scientists believe in the possibility of water ice on the ground of the caves. Water ice is abundant under the ground atleast near the poles, and probably elsewhere too.

The Mars Reconnaissance Orbiter has found evidence of glaciers covered in regolith.[4] Radar reflection data indicates that these are not Rock Glaciers that have been previously suspected on Mars, but instead are thick glacial ice covered in a thin layer of debris. The buried glaciers lie in the Hellas Basin region of Mars' southern hemisphere with similar aprons detected extending from cliffs in the northern hemisphere.

The human metabolism requires a regular intake of fresh water. Pure liquid water is non-existent on Mars but there is abundant frozen water and hydrated minerals. Since getting the water for use will require some industrial effort, the recycling of all excretion would provide advantages in reducing water use. There are two ways: Wastewater can be treated with technical means, which is partially done on the ISS already. Alternatively, the water can be kept in a nearly natural cycle, using parts of the greenhouses for biological wastewater treatment.

The concentration of deuterium in Martian hydrogen and thus in Martian water is between five and thirteen ten-thousandth-parts.[5] or about six times the relative abundance on Earth. Still this concentration is far from the 25% of the body's content of hydrogen that would need to be substituted by deuterium before there are any serious health effects. Deuterium is not a cumulative poison. At about one thousandth part of the hydrogen in Martian water, deuterium would be excreted as fast as it is consumed and would be no health problem.

Many industrial processes considered for a Mars settlement, in particular the production of methanol and methane, require hydrogen gas. This can be obtained by electrolysis, with oxygen gas as a byproduct.

Most other processes require the use of significant quantities of water as a solvent for reagents such as acids or ammonia.