The Curious Case for Methane on Mars: Methane and Active Organics Discovered on Mars 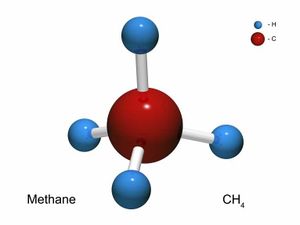 On December 16, 2014 at the American Geophysical Union conference in San Francisco, a panel of scientists working on the Mars Science Laboratory (MSL) Curiosity Rover data announced what we have all been waiting decades to hear.  John Grotzinger stated unequivocally, “…there is methane occasionally present in the atmosphere of Mars and there are organics preserved in (…) rocks on Mars.”

Why is this important?  All life on Earth that we have discovered so far is carbon based.  Carbon is found in the DNA of all life forms on Earth and can bind with many other elements to form thousands of organic molecules that are involved in biological processes. Finding organics and methane is a game changer for all of science, from astronomy to zoology.  Organics in general refer to molecules that are often found as components of life.  We know from studying life forms on Earth that methane is a common organic molecule that is a waste product of bacteria and macro organisms.  In fact, approximately 90% of Earth’s methane has a biological origin.  However, about 10% of methane on Earth is a result of geological activity.  According to author Jeffrey Bennett from the University of Colorado, Boulder, “The amount of methane in the atmosphere appears to vary regionally across Mars, and also seems to vary with the Martian seasons.  This has led some scientists to favor a biological origin…if the source is volcanic…the amount of…heat necessary for methane release [could] be sufficient to maintain pockets of liquid water underground.” Pockets of liquid water would be conducive to life and it has been confirmed that liquid water is occasionally present on the surface Mars and is likely to exist in the subsurface.

The Earth and Mars have many similarities including a 23 hour and 56 minute and 24 hour 37 minute solar day respectively, a similar axial tilt causing seasons to occur, a rocky surface with many of the same types of rocks and minerals (which may be used as a source of energy for extreme organisms), volcanic activity and hydrothermal vents past and/or present, water that is/was fresh, salty, acidic, and/or basic, magnetic fields (Mars has pockets of magnetism), and quakes.  Now and perhaps most important of all, organic matter and methane.  The fleet of rovers and orbiters that have arrived at Mars and sent back ample amounts of data, have proven an environment conducive to microorganisms existed and may currently exist on the Red Planet.

The Viking missions were sent to Mars in the mid 1970’s. They carried a variety of scientific instruments.  Some of them sampled the atmosphere and some examined the regolith.  The results of these experiments have been studied repeatedly since they were performed.  The Labeled Release Experiment, designed by Dr. Gil Levin, made a controversial and still contested discovery of life on Mars. Viking also discovered methane at 10.5 parts per billion (ppb) in 1976.  The data is still being debated and analyzed decades later. 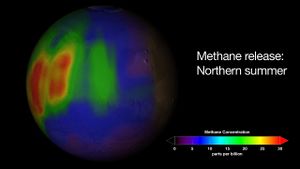 Methane plumes detected in 2003 and published in 2009 by Mumma and his team. Credit: NASA.

While utilizing the NASA Infrared Telescope in Hawaii, Michael Mumma, of NASA Goddard, observed methane using ground-based instrumentation in 2003. Mumma and his team’s observations were made over a heavily fractured region on Mars called Nilli Fossae. “We observed and mapped multiple plumes of methane on Mars, one of which released about 19,000 metric tons of methane,” stated Dr. Geronimo Villanueva, part of Mumma’s team, from the Catholic University of America in Washington DC. When he followed up the observations in 2006, the methane had vanished.  Some scientists have stated that is indicative of a seasonal plume.  According to NASA’s astrobiology website Mumma and his team observed 20-60 ppb of methane near the poles and up to 250 ppb near the equator.  It is interesting to note that the levels of methane are significantly higher near the equator where the temperature is higher and possibly more conducive to life.

The European Space Agency (ESA) announced in 2004, they had discovered plumes of seasonal methane on Mars.  ESA announced that the Planetary Fourier Spectrometer (PFS) on Mars Express detected about 10 ppb of methane in the Martian atmosphere.  A spectrometer is a device that “looks” at a sample of something, in this case atmospheric gases, and takes readings to determine what molecules make up the sample being observed.  A computer-generated graph of some type is then read by scientists to analyze the spectral data.

Although ESA and NASA themselves had previously detected methane on Mars, it was important for NASA to continue the search.

The Mars Science Laboratory (MSL) Curiosity Rover landed on Mars in August of 2012, to continue the search for methane and water, among other things.  It seemed that almost as soon as the Curiosity Rover started exploring her new home on Mars, she discovered a dry riverbed where fresh water once flowed in Gale crater.  When MSL’s instruments drilled into and examined the rock dubbed “John Klein” scientists realized that the rock contained what biologists call CHNOPS. That acronym stands for Carbon, Hydrogen, Nitrogen, Oxygen, Phosphorus, and Sulfur. Those are the six elements needed for all life on Earth to exist.  Another discovery were molecules that included carbon which scientists called “simple organics”.  One of the most important discoveries included more complex organic molecules than previously discovered, such as methane and chlorobenzene.  We know Mars is enriched with all of the same chemicals to make life that the Earth has.  This great discovery puts to rest the long debate about whether Mars has organics. 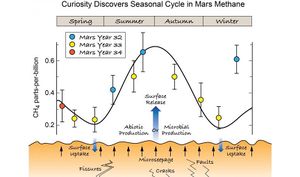 As NASA continued utilizing MSL to search, in 2018, it was confirmed that the Curiosity Rover’s Sample Analysis at Mars (SAM) instrument’s tunable laser spectrometer detected methane and other organics on Mars. The methane that was discovered occurs in small localized plumes in Gale Crater. It has been determined that a seasonal cycle of methane exists on Mars. The amount of difference between the least and most amount of methane detected is much larger than expected.  With the more recent observations the amount of methane detected in Gale Crater changed by a factor of 3x.  Scientists also discovered a phase lag exists which is a clue that something is happening in the subsurface of the planet.  Following up with more detailed research, a paper published in 2019 by Marco Giuranna in Nature Geosciences, confirmed with the PFS on ESA’s Mars Express, confirmed that the 2 spacecraft observed the same magnitude of a methane plume in the same location. According to NASA’s astrobiology website, “The clear conclusion of these (and other) recent findings is that Mars is not a ‘dead’ planet where little ever changes. Rather, it’s one with cycles that appear to produce not only methane but also sporadic surface water and changing dune formations.”

The amount of methane reported over the past forty years on the Red Planet ranges from approximately 0.7-250 ppb from a variety of sources, NASA, ESA, orbiters, rovers, and ground based Earth telescopes.  Methane breaks up and only has a lifespan of approximately 329 years in an atmosphere, which is a short time on a planetary scale. It then breaks down into water and carbon dioxide. Therefore, since methane is present on Mars, it must be getting replenished biologically or geologically currently. Many peer reviewed scientific journal articles have been published regarding Martian methane and the possible explanations for its existence.  Some of the potential sources of methane include the presence of life, volcanoes, hydrothermal vents, photochemistry and other geological processes.  Cosmic dust includes organic rich material that may be coming into the atmosphere of Mars and hit by ultraviolet solar particles and converted to methane, then picked up by wind and destroyed by photochemistry.  This seems unlikely with the recent amounts detected at the surface in Gale Crater. The water that is now known to exist on Mars may combine with the olivine present on the surface and serpentinize, causing a release of methane. A scenario that is looking more likely, due to the seasonal plumes and seepage, is biological life.  Some microbes bloom during warming periods and lie dormant during times of cooler weather.

Over the last few decades scientists have discovered amino acids in comets and meteorites, which we know slam into planets, so it is common sense to see that whether Mars originally had organics or not that organics would have landed there sometime in the last 4.5 billion years.  In 2012 it was announced that even Mercury has organics on its surface.  The moon Enceladus, orbiting Saturn, has organics spewing out of the ice-covered surface from the salty ocean below.  It seems that everywhere we look we find organics.  We must ask ourselves, how easy is it to form organics and life?  Is life everywhere?

“[A] striking aspect of the Curiosity discovery is that the concentration of methane detected varies sharply over time. That can only be the case if the source of the methane is locally concentrated, as a globally spread source could not cause such sharp variations. Thus, there may be a patch of ground relatively close to Curiosity which is the source of the emissions, and, therefore, a prime target to drill in an attempt to find subsurface life. Similar biologically suspect spots may well exist elsewhere. We need to locate such spots, and then send human explorers to drill and find out what lies beneath,” states Dr. Robert Zubrin, President of the Mars Society.