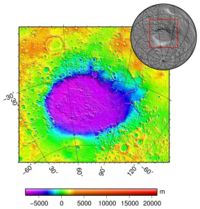 Although techtonic activity on Mars is widely believed to be intermittent at best, evidence of it's volcanic past is evident in the many volcano craters littering the surface. The largest volcano caldera is the famous Olympus Mons, the largest known volcano in the Solar System.