Difference between revisions of "EVA Suit" 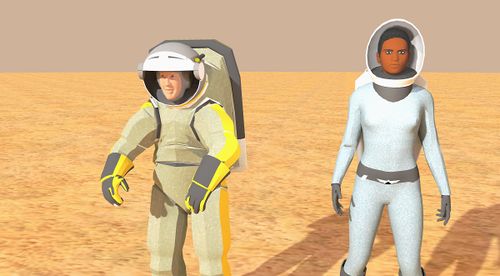 Since the atmospheric pressure on Mars is near vacuum, the settlers will need Space Suits for certain areas of the settlement. Creating more room for a growing settlement will include the creation of large rooms with less safety along with small rooms with full safety.

During a manned mission to Mars, human comfort will play a big role in the mission’s success. The current bulky space suit in use weighs in at 300 pounds and is impractical for use in low gravity environments.

This suit provides protection from vacuum, temperature and radiation. It includes telecommunications and autonomous life support.

Some parts of the settlement will not be filled with air, so a vacuum suit is necessary. This suit provides protection from vacuum, temperature and radiation. It includes interfaces for communications and life support. The radiation shielding of the suit may not be as strong and heavy as the Outside Suit. Air supply may be fed through a hose.

Low-safety rooms have an increased probability of accidental decompression. These can be storage rooms, factory rooms, additional greenhouses etc. Anything that is not the central living and sleeping rooms. These rooms may decompress accidentally.

The appropriate suit would be light, has no life support system, and provides only a minimal protection duration, let's say, one minute. Such a suit would keep only the pressure and the air that is already in the helmet. In case of a decompression the person would need to go immediately to the next door to a safe place.

Such a suit is cheap and light. Probably, it can be worn with the helmet open. Even if the decompression of the room is an explosive one, the person should be able to close the helmet within two seconds. With a little training, a person can easily survive a few seconds vacuum. A small single use air cartridge may then restore the pressure in the suit for one more minute.

Not all rooms of the settlement will be 100% radiation shielded, but may be safe enough against decompression. For settlers, who want to have children, at least the ovaries or the testicles need protection. 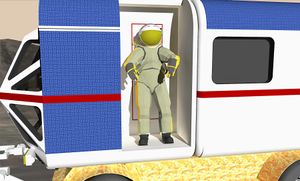 How to put on a suit

The Russian Orlan spacesuit is entered through the rear, with the backpack acting as a door, whereas the American EMU has various seals at the waist, the helmet, the gloves, the boots, etc. The Russian system can be entered in only five minutes, and with one seal is considerably safer as well.

The rear entry suit can be used with a suitport. This can reduce contamination of the habitat by preventing any ingress of exterior dust.

All spacesuits used to date have been pressurized, i.e. filled with air. It can be difficult to move in these suits, and as such they are only pressurized to a third of normal pressure to allow easy movement. At this low pressure, someone could suffer nitrogen narcosis. This requires the person who will be executing the EVA to breath pure oxygen for a few hours to purge their body of nitrogen, or to "camp out" overnight in a low pressure atmosphere. This is time consuming and not practical if an emergency EVA were to be carried out. An alternative could be a skintight suit, like the biosuit [1], however, these suits are difficult to enter and exit. A hybrid could be considered.

Researchers at MIT are working on a spandex and nylon BioSuit to be used in such a situation. The torso would be pressurized to about 30 kPa while the limbs would be sheathed in thinner material allowing for increased dexterity and decreased weight from the current model. [1]