Difference between revisions of "Ethanol" 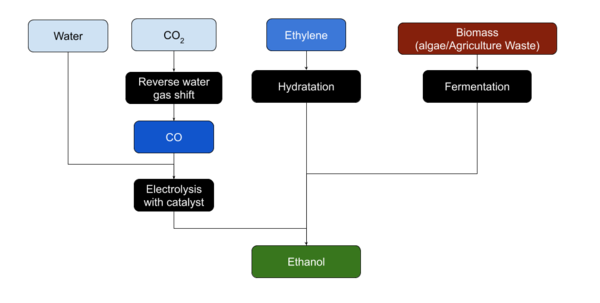 Argonne National Laboratory in Lemont Illinois has an electrocatalyst that efficiently converts carbon dioxide into ethanol. [4]

"The catalyst consists of atomically dispersed copper on a carbon-powder support. By an electrochemical reaction, this catalyst breaks down CO2 and water molecules and selectively reassembles the broken molecules into ethanol under an external electric field. The electrocatalytic selectivity, or 'Faradaic efficiency', of the process is over 90 percent. The catalyst also operates stably over extended operation at low voltage. The mechanism should also provide a foundation for development of highly efficient electrocatalysts for carbon dioxide conversion to a vast array of value-added chemicals."

CO2 is a stable molecule and transforming it into a different molecule is normally energy-intensive and costly. The electrochemical process of CO2-to-ethanol conversion using the catalyst could take advantage of the low-cost electricity available during off-peak hours. Because the process runs at low temperature and pressure, it can start and stop rapidly in response to the intermittent supply of excess electricity.