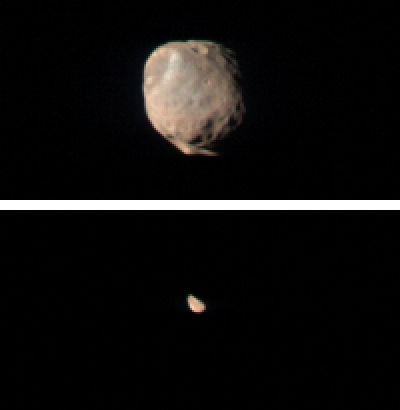 Two images of Phobos and Deimos taken by the Compact Reconnaissance Imaging Spectrometer for Mars (CRISM) instrument on the Mars Reconnaissance Orbiter on Nov 27, 2007.

These two images taken by the Compact Reconnaissance Imaging Spectrometer for Mars (CRISM) show Mars' two small moons, Phobos and Deimos, as seen from the Mars Reconnaissance Orbiter's low orbit around Mars. Both images were taken while the spacecraft was over Mars' night side, with the spacecraft turned off its normal nadir-viewing geometry to glimpse the moons. The image of Phobos, shown at the top, was taken at 0119 UTC on October 23 (9:19 p.m. EDT on Oct. 22), and shows features as small as 400 meters (1,320 feet) across. The image of Deimos, shown at the bottom, was taken at 2016 UTC (12:16 p.m. EDT) on June 7, 2007, and shows features as small as 1.3 kilometers (0.8 miles) across. Both CRISM images were taken in 544 colors covering 0.36-3.92 micrometers, and are displayed at twice the size in the original data for viewing purposes.

Phobos and Deimos are about 21 and 12 kilometers (13.0 and 7.5 miles) in diameter and orbit Mars with periods of 7 hours, 39.2 minutes and 1 day, 6 hours, 17.9 minutes respectively. Because Phobos orbits Mars in a shorter time than Mars' 24 hour, 37.4-minute rotational period, to an observer on Mars' surface it would appear to rise in the west and set in the east. From Mars' surface, Phobos appears about one-third the diameter of the Moon from Earth, whereas Deimos appears as a bright star. The moons were discovered in 1877 by the astronomer Asaph Hall, and as satellites of a planet named for the Roman god of war, they were named for Greek mythological figures that personify fear and terror.

The first spacecraft measurements of Phobos and Deimos, from the Mariner 9 and Viking Orbiter spacecraft, showed that both moons have dark surfaces reflecting only 5 to 7% of the sunlight that falls on them. The first reconstruction of the moons' spectrum of reflected sunlight was a difficult compilation from three different instruments, and appeared to show a flat, grayish spectrum resembling carbonaceous chondrite meteorites. Carbonaceous chondrites are primitive carbon-containing materials thought to originate in the outer part of the asteroid belt. This led to a commonly held view among planetary scientists that Mars' moons are primitive asteroids captured into Martian orbit early in the planet's history. More recent measurements have shown that the moons are in fact relatively red in their color, and resemble even more primitive D-type asteroids in the outer solar system. Those ultra-primitive bodies are also thought to contain carbon as well as water ice, but to have experienced even less geochemical processing than many carbonaceous chondrites.

The version of the CRISM images shown here were constructed by displaying 0.90, 0.70, and 0.50 micrometer wavelengths in the red, green, and blue image planes. This is a broader range of colors than is visible to the human eye, but it accentuates color differences. Both moons are shown with colors scaled in the same way. Deimos is red-colored like most of Phobos. However, Phobos' surface contains a second material, grayer-colored ejecta from a 9-kilometer (5.6-mile) diameter crater. This crater, called Stickney, is located at the upper left limb of Phobos and the grayer-colored ejecta extends toward the lower right.

These CRISM measurements are the first spectral measurements to resolve the disk of Deimos, and the first of this part of Phobos to cover the full wavelength range needed to assess the presence of iron-, water-, and carbon-containing minerals.

The following page uses this file: