Difference between revisions of "Geography of Mars"

This article will describe the geography of Mars, starting with large features and then get more specific. Many maps will display groups of features and all can be copied and used without permission. Although there are many good maps of Martian features, most are under some sort of copyright protection.

One of the most significant aspects of Mars is the vast difference between the northern and southern hemispheres. Much of the north is smooth and of low elevation. In contrast, the southern half of the planet is rough with great numbers of craters (indicating an old age). The south is also much higher in altitude (between 1-3 km higher). The boundary between the Southern and the Northern hemispheres is called the Martian dichotomy. Although several ideas have been advanced to explain these differences, at present it is thought the northern hemisphere was struck on a low angle by an asteroid early in its history.[1] [2] [3]

The Eastern hemisphere of Mars holds a small collection of volcanoes, Hellas Planitia, (a large impact crater) and a dark area that was the first feature noted on the surface by early astronomers. Studies suggest that the heat from the impact that created the Hellas Basin caused the entire surface of Mars to heat hundreds of degrees. In addition, the surface was covered with 70 meters of molted rock which fell from the sky. For a time an atmosphere of gaseous rock existed. This rock atmosphere would have been 10 times as thick as the Earth's atmosphere. In a few days, the rock would have condensed out and covered the whole planet with an additional 10 m of molten rock.[4] 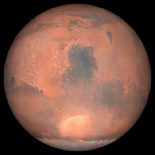 Eastern hemisphere of Mars Syrtis Major is the dark spot in the middle. Hellas Planitia lies to the south of Syrtis Major and appears light-toned due to clouds. Southern ice cap is at the bottom.

The HiRISE instrument onboard the Mars Reconnaissance Orbiter has discovered a strange feature on the floor of Hellas Planitia. Called "Honeycomb Terrain," it may be caused by great masses of buried water ice moving upward. [5] [6] [7] However, there are several other hypothesizes for its creation being considered. 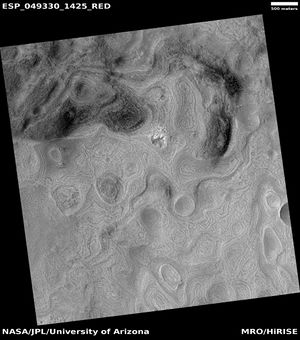 Honeycomb terrain on floor of Hellas Planitia that may be caused by masses of underground ice pushing up.

There is a big contrast between the Western and Eastern hemisphere of Mars. The Western hemisphere has the great Valles Marineris, the Grand Canyon of Mars. It could stretch nearly across the continental United States. At its western end is a large group of intersecting canyons, called Noctis Labyrinthus. This hemisphere also hosts a region known as Tharsis. Tharsis is home to the largest volcanoes on Mars and in the solar system. The southern part contains Argyre Planitia, a large impact basin that probably contained a lake.[8] [9] The western hemisphere also contains many outflow channels, such as Ares Vallis, Ravi Vallis, Mawrth Vallis, and Kasei Valles in which giant flows of water went roaring though.[10] [11] Calculations indicate that the amount of water required to erode such channels at least equals and most probably exceeds by several orders of magnitude the present discharges of the largest terrestrial rivers. These Martian floods would be comparable to the largest floods known to have ever occurred on Earth (the ones that cut the Channeled Scablands in North America).[12] [13] 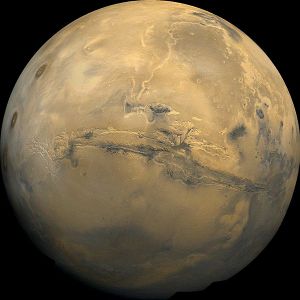 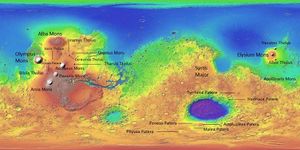 Mars is a land of great volcanoes. Tharsis contains the largest volcano in the solar system, along with several that are about as tall as the Earth’s tallest mountains. In addition, many small ones may actually be mostly covered by ash. We may be seeing only their tips.[14] Tharsis covers almost 25 % of the surface of the planet.[15] Elysium volcanic province, another smaller group of volcanoes, sits in the Eastern hemisphere; the biggest of the three is called Elysium Mons. Apollinaris Mons is near the landing site for the Spirit Rover. This volcano may have covered over expected lake deposits in Gusev Crater. The first feature to be drawn on early maps of Mars was Syrtis Major. This dark feature is volcanic by nature with two caldera: Meroe Patera and Nili Patera. Studies involving the regional gravity field suggest a solidified magma chamber exists beneath its surface.[16] Syrtis Major is of interest to geologists because dacite and granite have been detected there from orbiting spacecraft. Dacites and granites are very common on Earth but rare on Mars. Lava sometimes forms lava tunnels. These are places in which a hard cap forms on top of a flow while the rest of the liquid lava has moved away. These tunnels can be quite large. Many have suggested that future colonists can use these tunnels for their shelters where there would be protection from radiation and meteorites, and where there would be a more constant temperature. Some pictures taken with HiRISE seem to show pits that may lead into these hollowed out places. 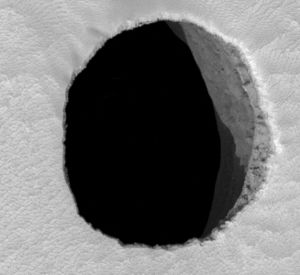 Several old, eroded volcanoes exist near to the great impact crater Hellas Planitia. Some researchers have suggested that the location of the highland paterae around Hellas is due to deep-seated fractures caused by the impact that provided channels for magma to rise to the surface.[17] [18] [19] 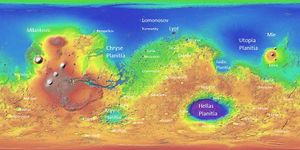 Because the surface of Mars is so old, billions of years in some areas, it contains many impact craters. Basically, the more craters the older the surface. The older, southern highlands contain far more craters than the North. Craters can help us sample material under the surface because an impact event brings material from deep underground. Moreover, some material from the impactor could be gathered by automated machines in the future for use by the colonists. Our rovers have already photographed and examined meteorites sitting on Mars. Meteoritic material is more likely to come from small craters, as in large impacts the impacting body is usually vaporized. 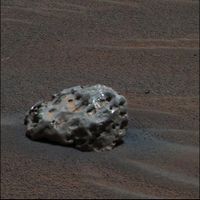 Low plains on Mars are called “Planitia.” Many of these were formed by impact events, especially Chryse, Utopia, Isidis, Argyre, and Hellas. Hellas Planitia is the deepest area on the planet. Many craters are believed to have once held lakes, including Argyre Planitia and Hellas Planitia in the South.[20] [21] [22] High resolution views of many crater show that they have almost completely filled with ice which is visible as many concentric ridges. Craters begin with a bowl shape. After millions of years of collecting snow, they appear flat and shallow. Researchers have named the material “ Concentric Crater Fill .”

Concentric Crater Fill Many craters show these concentric ridges which are from ice moving in the crater which has almost completely filled with ice.

The craters Milankovic, Lomonosov, Kunowsky, Lyot, and Mie are in the North and are easy to spot because there are very few features near them. The Viking 2 spacecraft landed near Mie Crater. Mariner Crater was discovered and named after the Mariner 4 spacecraft. Mariner 4’s image of Mariner Crater was the best picture returned by the Mariner 4 flyby. Nicholson and Schiaparelli Craters sit almost directly on the equator. 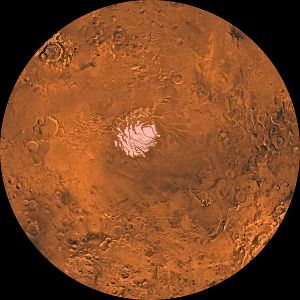 Region of South Pole with ice cap Southern ice cap is much smaller than the North’s.

This region is covered in the Mare Australe quadrangle. The ice cap at the South Pole is much smaller than the one in the North. Parts of Mare Australe display pits that make the surface look like Swiss cheese.[23] [24] [25] [26] These pits are in a 1-10 meter thick layer of dry ice that is sitting on a much larger water ice cap[27]. Some, such as Robert Zubrin have suggested craters on the south pole of mars, specifically Korolev Crater as promising site for a sublake settlement on mars[28]. 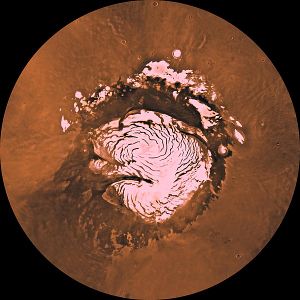 The ice cap in the north is far larger than the one in the south. It contains a large pattern of spiral-shaped troughs. In the troughs many layers are visible in high resolution photos. The layers result from climate changes. At times the atmosphere contains more dust, consequently darker layers are formed. Sometimes thicker deposits of ice are deposited, making thicker layers. From observations with the Shallow Radar instrument (SHARAD), researchers determined that the total volume of water ice in the cap is 821,000 cubic kilometers. That is equal to 30% of the Earth's Greenland ice sheet, or enough to cover the surface of Mars to a depth of 5.6 meters[29] [30] [31]

Many of the names for features on Mars are based on old classical names. Most of these names came from the names given by the astronomer G. V.Schiaparelli. A more detailed discussion of the origin of Martian nomenclature can be found in How are features on Mars Named?. 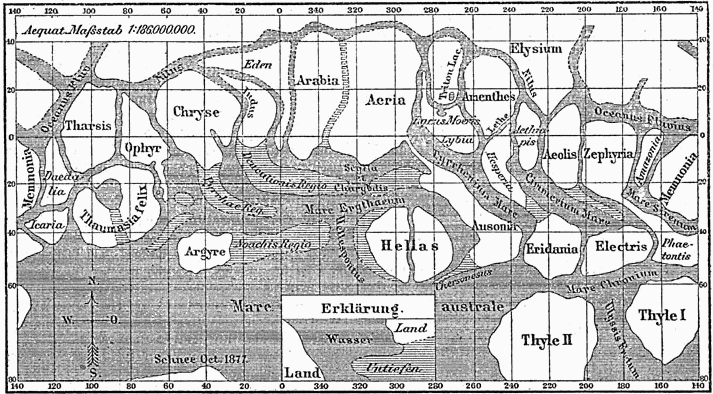 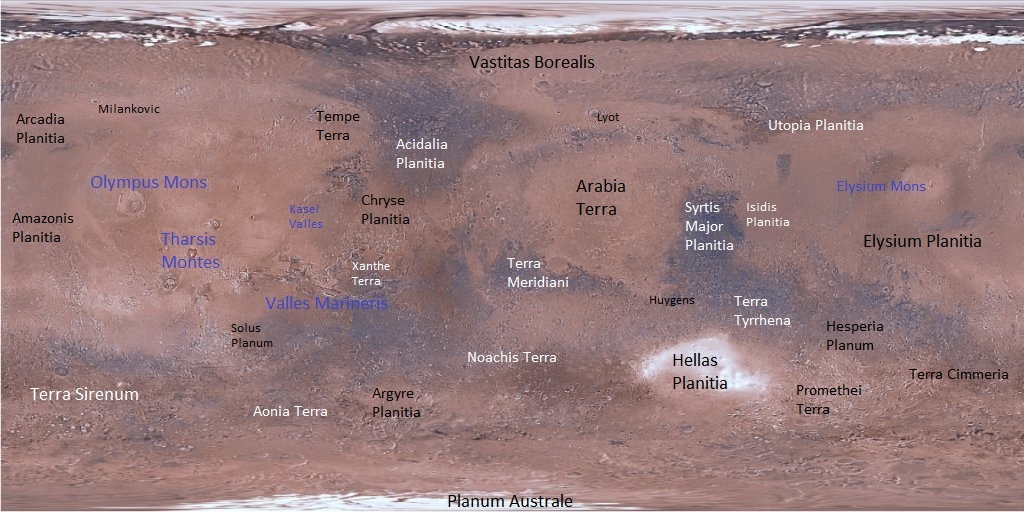 One way of locating places on Mars is with quadrangles. The surface of Mars is divided into 30 areas. Each quadrangle has a number and a name. Detailed descriptions and many images from each quadrangle can be found on the Quadrangles pages. 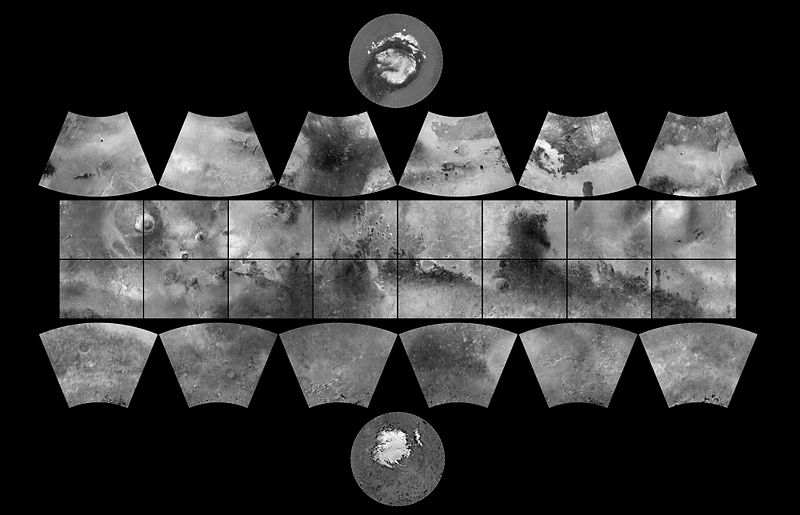 Picture of Mars with quadrangles indicated. Pictures are from Mariner 9 and Viking orbiter images 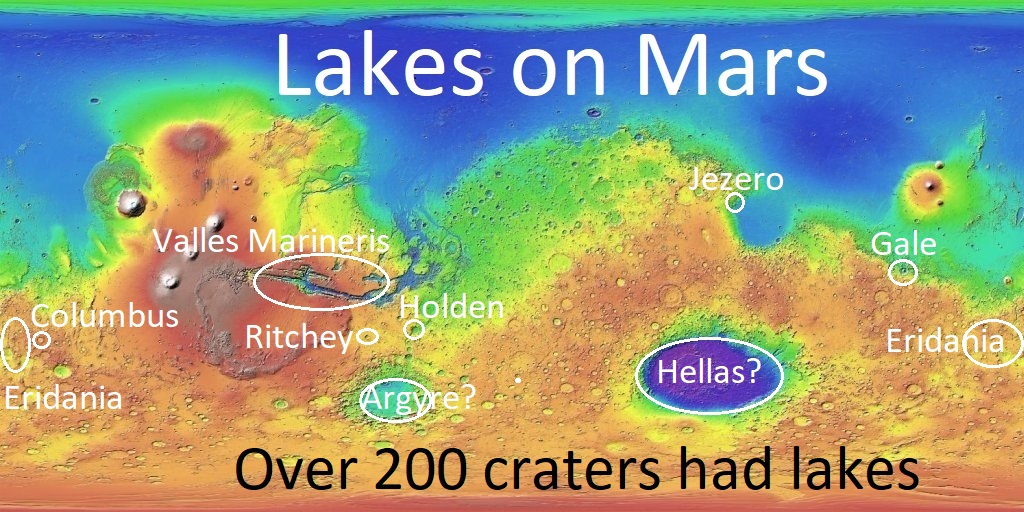 We have attempted to land on the Martian surface many times. There have been many failures. However, in recent years there have been some missions that have been highly successful. The Spirit and Opportunity Rovers were only expected to last for 3 months. Both lasted for many years. As of this writing (April 2018) Opportunity is still examining the planet. These twin rovers landed in January of 2004. It might go much longer, but the government is eager to shut them down. Curiosity Rover has sent back some great pictures and science. Some believe it will be working until people land on the planet.

The following map shows the landing sites and the dates of successful and unsuccessful missions.

Locations of Clay and hydrated minerals 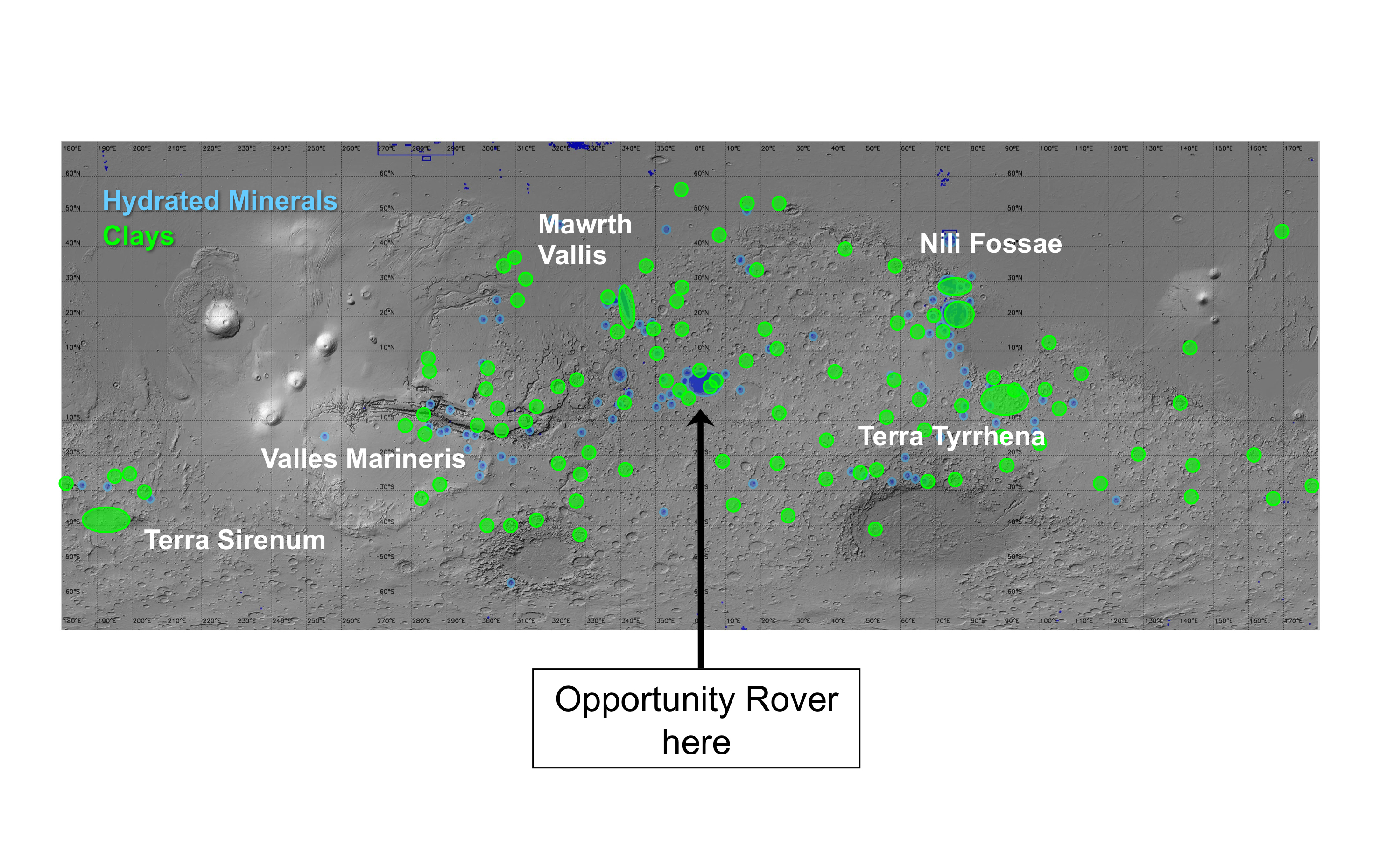 Data gathered from spacecraft over many years has enable scientists to construct a map showing where ice may be found under a thin cover of sand. Places where ice is found under perhaps just centimeters of sand would be idea for future colonists. They could send robotic machines to gather ice which could provide water for settlements. Places where water-ice is found under a thin soli cover can be determined because of the properties of ice. If ice abundant ice is found just under the surface, the region will take longer to heat up in the spring and longer to cool down in the fall. Thermal inertia measurements gathered with the Mars Global Surveyor were used to generate a map of underground ice.[33] [34] 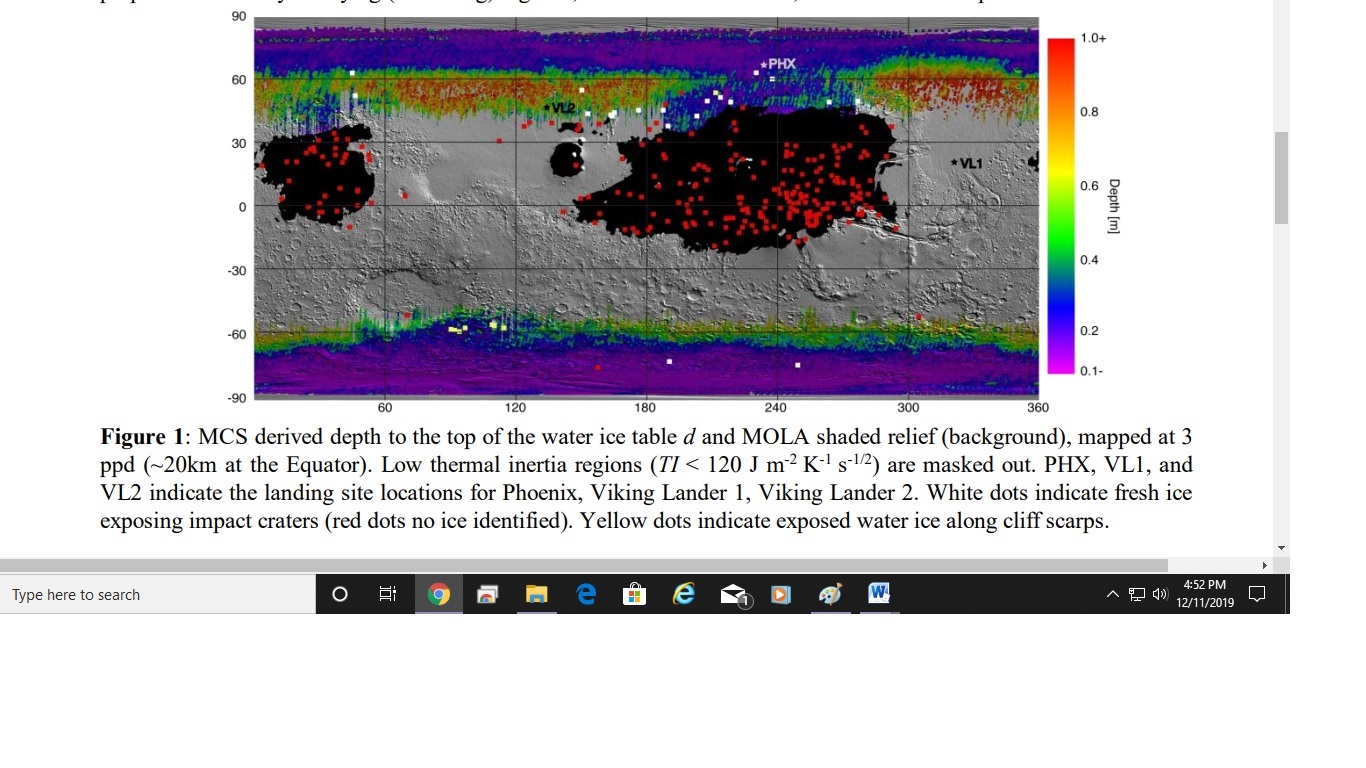