Mars has a mass of 6,419 · 1023 kg. Compared with Earth this is only a little bit more than a tenth. This results in a lower Gravity as the planet is also less dense than Earth.

The gravitational acceleration is 3,71 m/s², compared to 9,81 m/s2 on Earth. The resulting weight of any body on the surface of Mars is only a bit more than a third, compared with the same body on Earth. Mass and inertia remain the same, however.

Impact on physics and nature

The development of human embryos might be different. Also, the long term consequences for the health of human beings is unclear. Constant physical exercise has proven to be beneficial on the ISS to reduce calcium loss and maintain muscle mass. However the difference between no gravity and low gravity is still unknown.

The absence of gravity during interplanetary travel could also undermine the fitness of explorers or settlers to perform their jobs upon their arrival at Mars.

Daily exercise appears to reduce, but not eliminate, calcium loss in a zero-gravity environment.  Two hours/day has limited calcium loss to 12%, and 4 hours/day limited it to 5%, during stays on Mir and the International Space Station.

The stress placed on bones by normal gravity causes a certain amount of interstitial fluid flow within bones, which may be important in preserving bone calcium.  It might be possible to stimulate this effect using, as a medication, a signaling protein called a growth factor that allows fluid to leak out of blood vessels.

If research identifies a specific gene as the regulator of low-gravity calcium loss, then a more refined version of this approach might be possible.  Scientists could attempt to design a medication that targets this specific gene and holds its expression at the same level as it would be in Earth gravity.[1] 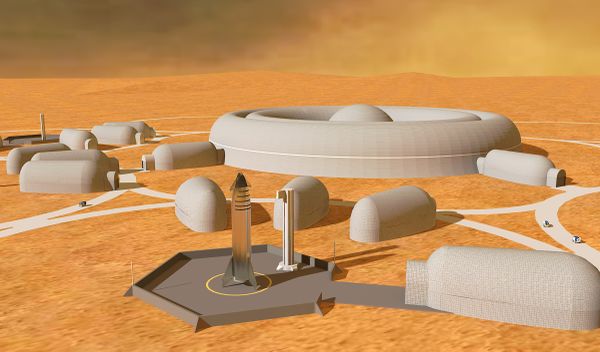 For the 2019 Mars Society settlement design contest, Kent Nebergall proposed the Eureka base design. This design addresses most of the potential problems that might arise from lower gravity by building the settlement about a pair of rotating ring structures capable of simulating Earth gravity by centripetal force. Usually planned for spaceships, artificial gravity using centripetal force could be implemented on Mars.

The design[2] addresses a number of social and technological issues, as well as artificial gravity. 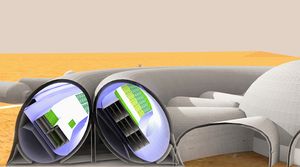 Cutaway view through the gravity rings