Ingenuity is a small helicopter that has flown on Mars, even though the Martian atmosphere is only 1% the density of the air in Earth’s atmosphere. It was attached to the underbelly of the Perseverance rover. Its lithium-ion batteries supply enough power for 90 second flights. To fly in the thin atmosphere it is very light (less than 1.8 kg and its blades rotate 3,000 rpms. It's first flight was 39.1 seconds on April 19, 2021.[1] Date returned to Earth showed that Ingenuity climbed to its planned maximum altitude of 10 feet (3 meters, maintained a stable hover for 30 seconds, and then descended for a soft landing.[2]

Ingenuity's second Mars flight took place on April 22. That was the 18th sol or Martian day. It lasted 51.9 seconds. Besides going higher and longer it went sideways.[3]

Scientists also managed to capture lots of images during the flight with the color camera and with Ingenuity’s black-and-white navigation camera, which tracks surface features as it flies. Images from that navigation camera are typically used by Ingenuity’s flight controller and then thrown away unless the helicopter is directed to store them for later use. During this flight, they saved even more images than on previous flights: about 60 total during the last 164 feet (50 meters) before the helicopter returned to its landing site.[4]

Ingenuity's fifth flight was recorded on May 7, 2021, by one of the navigation cameras aboard Perseverance. The helicopter rose to a new height record of 33 feet (10 meters)and flew 424 feet (129 meters) to a new landing site. This was its one-way flight. Ingenuity flew for 108 seconds.[5] 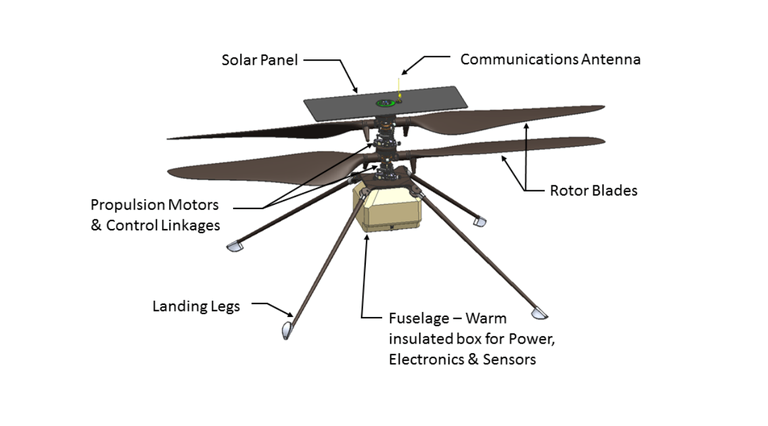 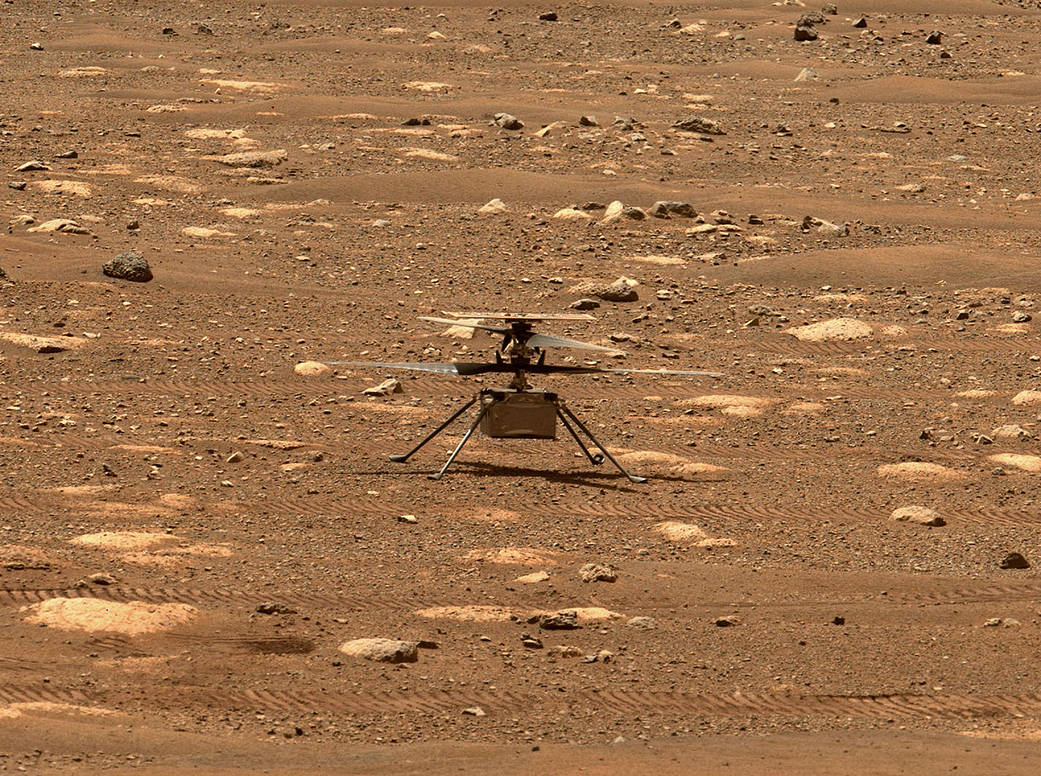 Ingenuity on the Martian surface 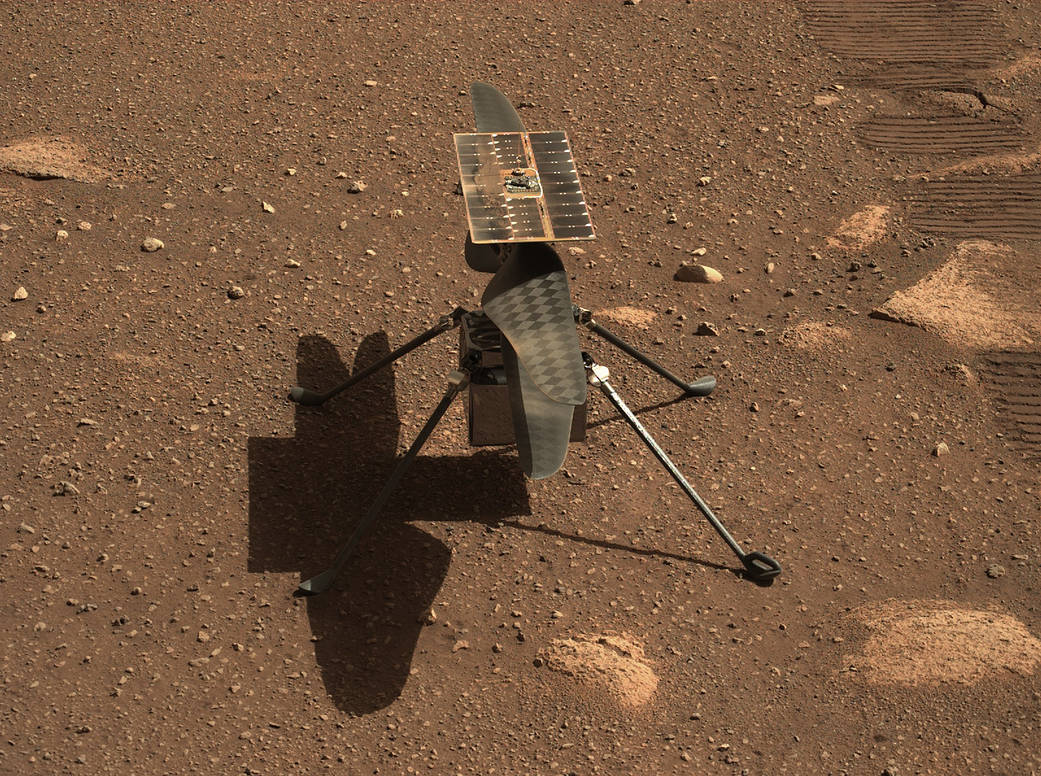 Close view of Ingenuity as seen by Mastcam Z 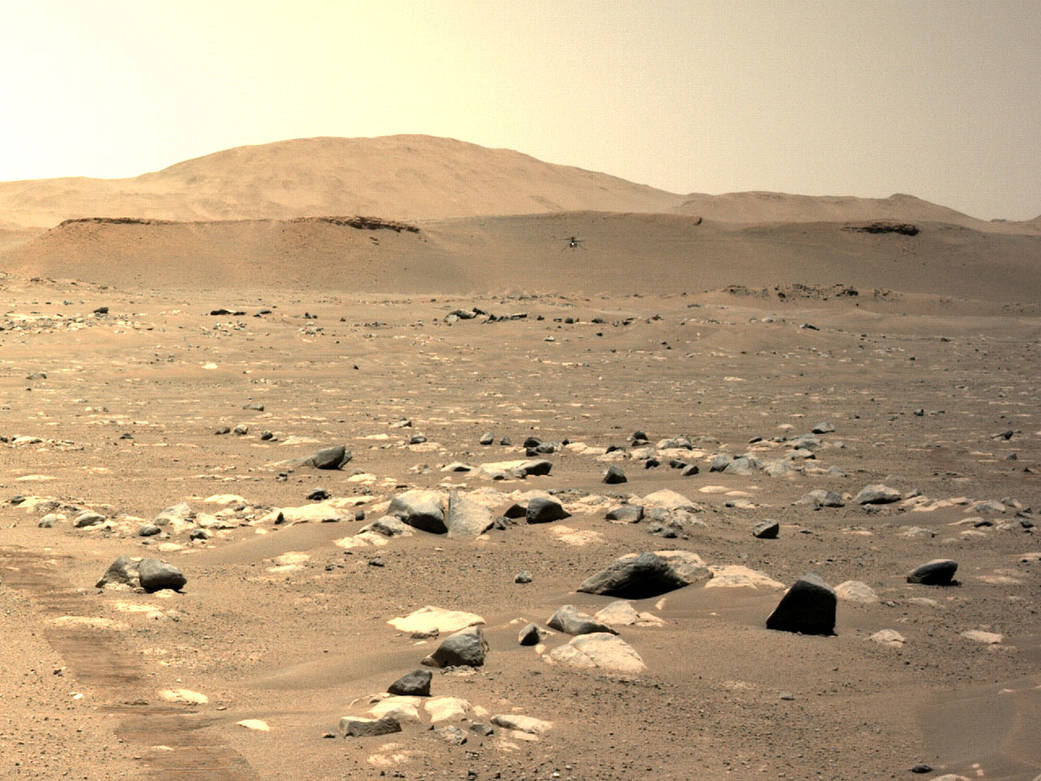 Ingenuity Mars Helicopter can hovering during its third flight 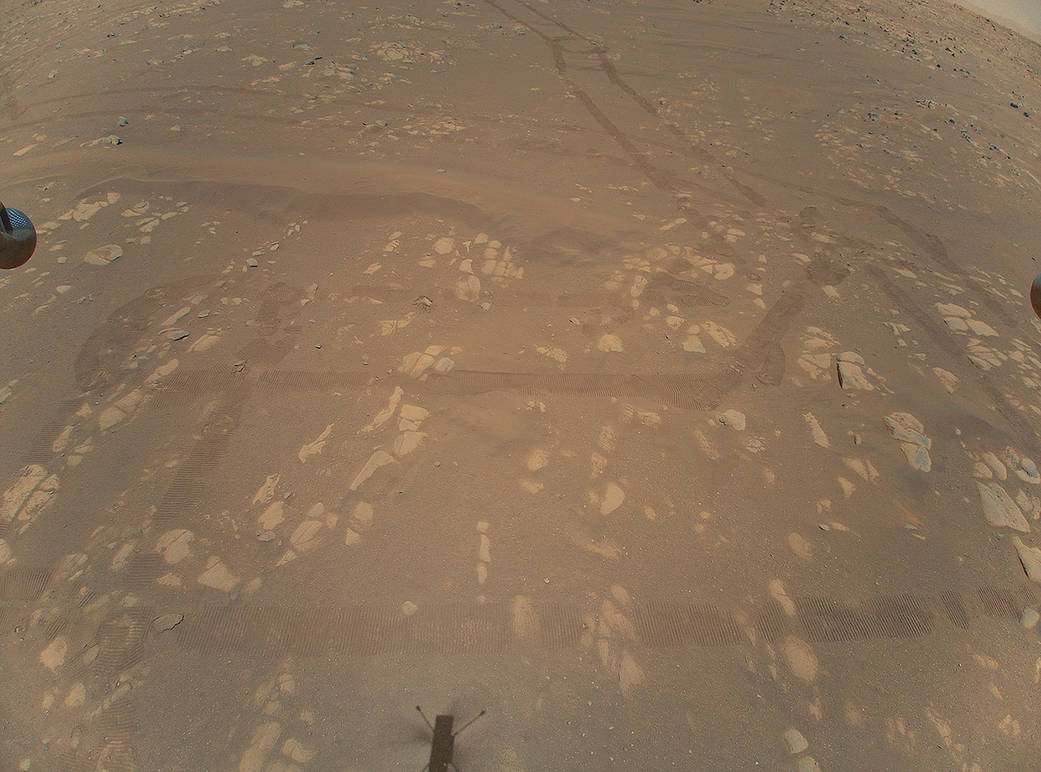 This is the first color image of the Martian surface taken by an aerial vehicle while it was aloft. The Ingenuity Mars Helicopter captured it with its color camera during its second successful flight test on April 22, 2021. At the time this image, Ingenuity was 17 feet (5.2 meters) above the surface. The winding parallel discolorations in the surface reveal the tread of the six-wheeled rover. Perseverance itself is located top center, just out frame. “Wright Brothers Field” is in the vicinity of the helicopter’s shadow, bottom center, with the actual point of takeoff of the helicopter just below the image. A portion of the landing pads on two of the helicopter’s four landing legs can be seen in on the left and right sides of the image, and a small portion of the horizon can be seen at the upper right and left corners.