Difference between revisions of "Mars Odyssey" 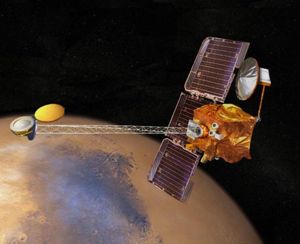 "2001 Mars Odyssey is part of NASA's Mars Exploration Program, a long-term effort of robotic exploration of the red planet. The opportunity to go to Mars comes around every 26 months, when the alignment of Earth and Mars in their orbits around the sun allows spacecraft to travel between the two planets with the least amount of energy. 2001 Mars Odyssey launched on April 7, 2001, and arrived at Mars on October 24, 2001, 0230 Universal Time (October 23, 7:30 pm PDT/ 10:30 EDT)." - Mission website.

After spacecraft's main engine fired to place Mars Odyssey into orbit around Mars. It took three months of aerobraking to reduce and circularize the orbit. Odyssey was able to save more than 200 kilograms (440 lb) of propellant by allowing atmospheric drag to slow the spacecraft in its final orbit, instead of using fuel. The weight of fuel saved permitted the mission to use a Delta II 7925 launch vehicle, rather than a larger, more expensive rocket.[1]

Odyssey began its science mission on February 19, 2002. It's initial mission lasted until August 2004, but it was granted many mission extensions; consequently, it is still sending back data as of October 2018.[2] On Dec. 15, 2010, Mars Odyssey reached the record for the longest operating spacecraft at Mars, with 3,340 days.[3]

The three main instruments on Odyssey are:

The orbiter recorded and transmitted data about concentration and distribution of hydrogen and other chemicals of the Martian surface. Additionally, the radiation conditions were measured, covering ultra violet and gamma. The amount of hydrogen detected is just about equal to the amount of water in the top meter of ground. Water contains 2 parts hydrogen and 1 part oxygen. On Mars, very little, if any, hydrogen comes from chemicals other than water. Detailed analysis of data from the gamma ray spectrometer showed that 20-50 % of the lower level (0.5-1 meter below the surface consists of water ice. Since ice is only half the density of rock, that means that one half of the bottom 50 cm is ice. In other words, one bucket of that material would contain one half bucket of ice.[9] 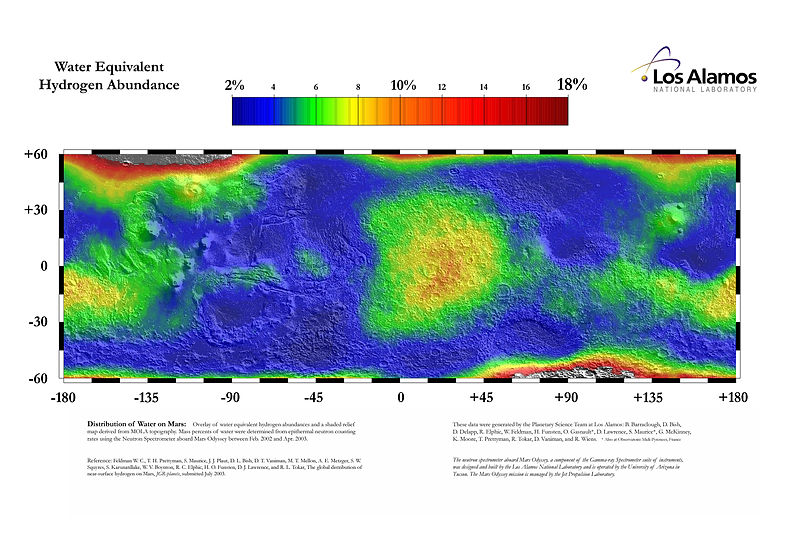 Map showing global abundance of water in upper meter of Mars, as measured by Mars Odyssey 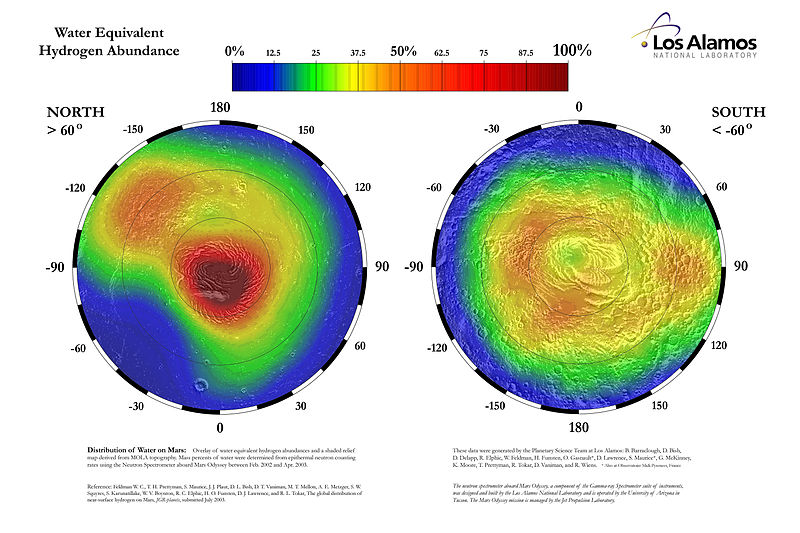 Map showing abundance of water in the upper meter of Mars in the high latitudes, as measured by Mars Odyssey

The Mars Odyssey Thermal Emission System (THEMIS) mapped a variety of igneous minerals on the planet. The rocks basalts and dacite were found. Many rocks are olivine-rich. Some of the olivine-rich rocks would be classified as picrites. The presence of dacite implies that some rocks are more evolved. These evolved rocks could contain useful minerals for future colonists.[10]

How to see Mars Odyssey Pictures

You can find a map of all Mars Odyssey images at [[1]] http://global-data.mars.asu.edu/bin/themis.pl

Just click on the part of the map that you want to see Mars Odyssey pictures of.

One can also go to [[2]] https://themis.asu.edu/gallery to see pictures arranged in different categories (canyons, layers, etc.), or even live as received by scientists on the ground.

The presence of chloride salts was a significant find.[11] [12] About 200 locations in the southern hemisphere display spectral characteristics consistent with chloride minerals. These salt deposits occur in the middle to low latitudes all around the planet within southern heavily cratered terrain. The team's report appears in the March 21, 2008 issue of the scientific journal Science.[13] Since many of the deposits sit in low spots with channels leading into them, they may be similar to salt-pan deposits on Earth. Water may have flowed there for a long time. To form salt deposits usually much water has to evaporate to leave salt behind. The places with salts may once held organisms.[14]

What are the exact data?