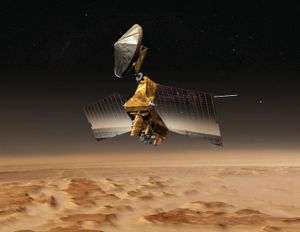 An artist's impression of the Mars Reconnaissance Orbiter above the Red Planet.

The Mars Reconnaissance Orbiter (MRO) was launched on August 12, 2005 by an Atlas V rocket from Cape Canaveral Air Force Station and reached the Red Planet on March 10, 2006. The NASA mission began taking data in November 2006 after completion of an aerobreaking manouver in the upper Mars atmosphere to slow it into orbit.

The MRO is intended to contribute to the four main areas outlined by NASA's Mars Exploration Program.

The orbiting satellite is making this possible through the use of some of the most advanced optics available to modern spacecraft. The High Resolution Imaging Science Experiment (HiRISE) is investigating the geology of Mars to identify deposits that are a result of climatic and geologic processes. This new, high resolution approach will aid future landing sites for robotic and manned missions to the Red Planet. Current resolution capabilities can produce images of features of less than 1 meter. For high priority targets, a stereo method can be applied so features of 25 cm can be imaged.[1]

The Compact Reconnaissance Imaging Spectrometer for Mars (CRISM) is primarily used to detect any evidence for past and present traces of water through the analysis of minerals and geology. In particular is the objective to help locate Martian resources that could provide local support for eventual human exploration and colonization of Mars.[2] The most important of these is water. 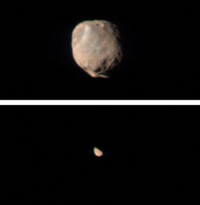 MRO images of both moons, Phobos and Deimos taken by the The Compact Reconnaissance Imaging Spectrometer for Mars (CRISM) instrument on Nov 27, 2007.

In an effort to characterize the 4 dimensional dynamics of the Mars atmosphere (3 spatial dimensions and time), the Mars Climate Sounder (MCS) is used to acquire profiles of the lower 50 miles of the atmosphere, including clouds, dust, pressure and temperature.[3]