Difference between revisions of "Solar panel" 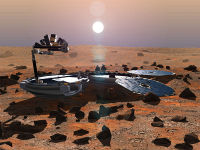 Dust covers can be deployed over the panels at night or during dust storms. However, during even the worst dust storms energy remains available through diffuse solar and covering the panels would probably be counterproductive.