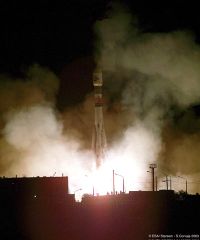 The Soyuz-Fregat family of launch vehicle is designed for cost-effective solutions on missions that require medium and high altitude Earth orbits. Soyuz-Fragat uses the basic Soyuz vehicle (often associated with delivering supplies to the International Space Station) that composes of a lower/first stage (with 4 booster rockets), a central/second stage and an upper portion containing the third stage (the Fragat upper stage) and payload. The Mars Express mission (including nearly 30 other missions) used such a rocket to be inserted into Earth orbit before its journey to Mars.

The Soyuz-Fragat is well-known for its reliability and high technical standards.