Difference between revisions of "Template:Featured Article" 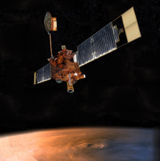 NASA's Mars Global Surveyor was launched on November 7, 1996 from Cape Canaveral Air Force Station (Florida) on a McDonnell Douglas-built Delta II-7925 rocket. Mars Global Surveyor was the first successful US mission launched to Mars in 20 years since the Viking mission in 1976. On November 2, 2006 it was lost due to loss of power (through incorrect alignment of the solar panels). On arriving into Mars orbit, the Mars Reconnaissance Orbiter made attempts to image the lost Mars Global Surveyor so mission control could diagnose the problem, but the spacecraft could not be found. (read more)