Difference between revisions of "Thaumasia quadrangle"

The Thaumasia quadrangle, is famous for showing us a good example of possible past rainfall and rivers in pictures of Warrego Valles taken with Mariner 9 and the Viking Orbiters. Those early images revealed a network of branching valleys. They were clear evidence that Mars may have once been warmer, wetter, and perhaps had precipitation in the form of rain or snow. Before we saw those pictures, we believed Mars was just an old, dry desert.

The Thaumasia quadrangle is one of a series of 30 quadrangle maps of Mars used by the United States Geological Survey (USGS). The Thaumasia quadrangle is also referred to as MC-25 (Mars Chart-25).[1] The Thaumasia quadrangle covers the area from 30° to 65° south latitude and 60° to 120° west longitude (300-240 E). It encompasses many different regions or parts of many regions that have classical names. The northern part includes Thaumasia plateau. The southern part contains heavily cratered highland terrain and relatively smooth, low plains, such as Aonia Planum and Icaria Planum. Parts of Solis Planum, Aonia Terra, and Bosporus Planum are also found in this quadrangle. The east-central part includes Lowell Crater. Lowell Crater was named after Percival Lowell who studied Mars with a telescope in Flagstaff Arizona and then went around the world promoting the idea that Mars was inhabited[2] The name comes from Thaumas, the god of the clouds and celestial apparitions.[3]

Gullies occur on steep slopes, especially on the walls of craters. Gullies are believed to be relatively young because they have few, if any craters. Moreover, they lie on top of sand dunes which themselves are considered to be quite young. Usually, each gully has an alcove, channel, and apron.[4] Gullies were once thought to be caused by recent flowing water. However, with further extensive observations with HiRISE, it was found that many are forming/changing today, even though liquid water cannot exist under current Martian conditions. Faced with these new observations, scientists came up with other ideas to explain them. The consensus seems to be that although water may have helped form them in the past, today they are being produced by chunks of dry ice moving down steep slopes. [5] [6] [7] There is evidence here in this quadrangle that indeed water in the past may have aided in the formation of gullies. Measurements of altitudes and slopes of gullies support the idea that snowpacks or glaciers are associated with gullies. Steeper slopes have more shade which would preserve snow.[8] Higher elevations have far fewer gullies because ice would tend to sublimate more in the thin air of the higher altitude.[9] This relationship seems to hold true in Thaumasia. This region is fairly high in evlevation and has very few gullies; however, a few are present in the lower elevations like the one pictured below in Ross Crater.

Mariner 9 and Viking Orbiter images, showed a network of branching valleys in Thaumasia called Warrego Valles. These networks are evidence that Mars may have once been warmer, wetter, and perhaps had precipitation in the form of rain or snow. A study with the Mars Orbiter Laser Altimeter, Thermal Emission Imaging System (THEMIS) and the Mars Orbiter Camera (MOC) support the idea that Warrego Valles was formed from precipitation.[11] At first glance they resemble river valleys on our Earth. But sharper images from more advanced cameras reveal that the valleys are not continuous. They are very old and may have suffered from the effects of erosion. A picture below shows some of these branching valleys.[12]

Channels near Warrego Valles, as seen by THEMIS. These branched channels are strong evidence for flowing water on Mars, perhaps during a much warmer period.

Thaumasia is in the old southern highlands of Mars. As such it is loaded with craters. Craters are important to scientists. The density of impact craters is used to determine the surface ages of Mars and other solar system bodies.[13] The older the surface, the more craters present. Crater shapes can reveal the presence of ground ice. The area around craters may be rich in minerals. On Mars, heat from the impact melts ice in the ground. Water from the melting ice dissolves minerals, and then deposits them in cracks or faults that were produced with the impact. This process, called hydrothermal alteration, is a major way in which ore deposits are produced. The area around Martian craters may be rich in useful ores for the future colonization of Mars.[14] Studies on the Earth have documented that cracks are produced and that secondary minerals veins are deposited in the cracks.[15] [16] [17] Images from satellites orbiting Mars have detected cracks near impact craters.[18] Great amounts of heat are produced during impacts. The area around a large impact may take hundreds of thousands of years to cool.[19] [20][21] Many craters once contained lakes.[22] [23] [24] Because some crater floors show deltas, we know that water had to be present for some time. Dozens of deltas have been spotted on Mars.[25] Deltas form when sediment is washed in from a stream entering a quiet body of water. It takes a bit of time to form a delta, so the presence of a delta is exciting; it means water was there for a time, maybe for many years. Primitive organisms may have developed in such lakes; hence, some craters may be prime targets for the search for evidence of life on the Red Planet.[26] 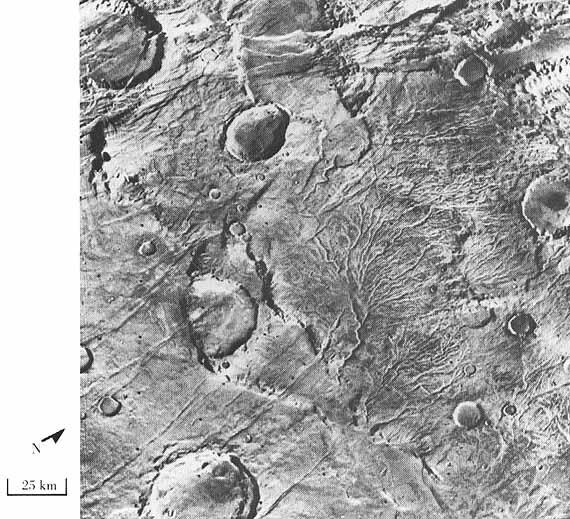 In the nearly half century of studying the Red Planet with orbiting satellites, much evidence has accumulating to prove that water once flowed in river valleys on Mars.[27] [28] Images of curved channels have been seen in images from Mars spacecraft dating back to the early seventies with the Mariner 9 orbiter.[29] [30] [31] [32] Indeed, a study published in June 2017, calculated that the volume of water needed to carve all the channels on Mars was even larger than the proposed ocean that the planet may have had. Water was probably recycled many times from the ocean to rainfall around Mars.[33][34]

Much of the Martian surface is covered with a thick ice-rich, mantle layer that has fallen from the sky a number of times in the past.[35] [36] [37]

Dust devil tracks are very common on Mars, especially in certain seasons. Dust devils can create very pretty tracks. Dust devils remove bright colored dust from the Martian surface; thereby exposing a dark layer. A thin coating of fine bright dust covers most of the Martian surface. When a dust devil goes by it blows away the coating and exposes the underlying dark surface creating tracks. It does not take too much fine dust to cover those tracks--experiments in Earth laboratories demonstrate that only a few 10's of microns of dust will be enough. The width of a single human hair ranges from approximately 20 to 200 microns (μm); consequently, the dust that can cover dust devil tracks may only be the thickness of a human hair.[38] Dust devils on Mars have been photographed both from the ground and high overhead from orbit. They have even blown dust off the solar panels of two Rovers on Mars, thereby greatly extending their useful lifetime.[39] The pattern of tracks has been shown to change every few months.[40] A study that combined data from the High Resolution Stereo Camera (HRSC) and the Mars Orbiter Camera (MOC) found that some large dust devils on Mars have a diameter of 700 m and last at least 26 minutes.[41] 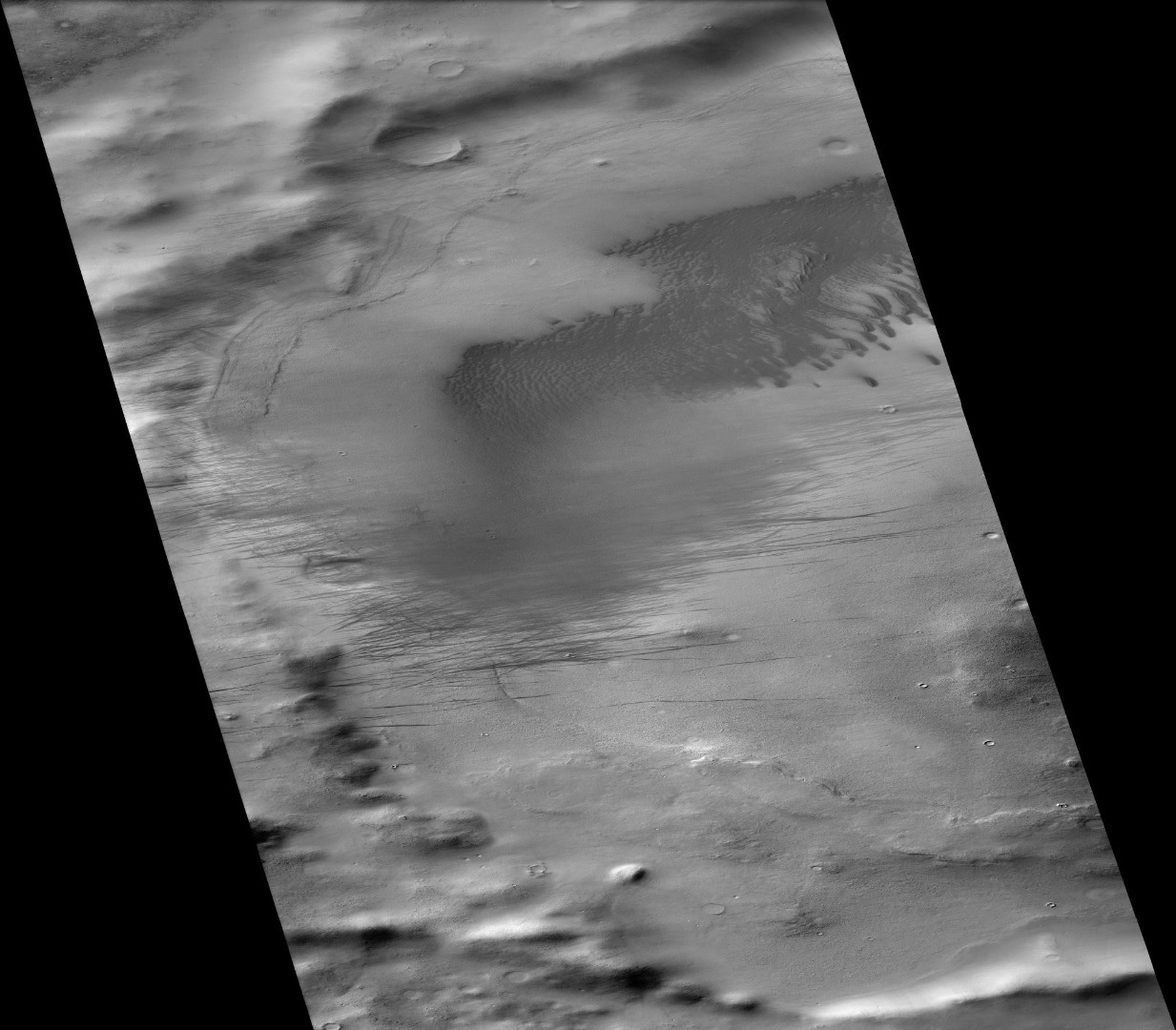 Biachini Crater, as seen by CTX camera (on Mars Reconnaissance Orbiter). Dust devil tracks and dunes are visible on the floor. The narrow, dark lines are dust devil tracks.

Since the 70’s, as our spacecraft have studied Mars with more and more advanced cameras and other instruments, we have found more and more evidence for glaciers. [42] [43] [44] [45] [46] [47] [48] On Mars these glaciers are covered with rock and dust debris a few meters to a few tens of meters thick. Although Mars today seems too dry for any glaciers, this covering material has protected the underlying ice. [49] One would think that under today’s conditions any exposed ice would undergo sublimation and disappear into the thin Martian atmosphere. That is, it would go directly from a solid to a gas. But, the isulating effect of surface material prevents loss of ice.[50] [51] Sometimes, the glaciers are active for a time and then the ice in them leaves. However, they leave behind ridges of debris that was carried within and on top of the ice. Often, the ridges make a curved shape.