Observations of dust devils and dust storms demonstrate that wind exists in the atmosphere of Mars. Yet, this atmosphere is comparatively thin, with a surface pressure less than 1% of that found on Earth.[3] This means that electricity generation via turbines would require wind speeds roughly triple those on Earth[1] or rotor blades 100-times larger[citation needed] (which in turn would pose problems for stability and material consumption). Initial evidence from the Viking and Pathfinder missions did not indicate strong winds,[1] making the viability of turbines unclear—with the fragmentary nature of the available knowledge about strength and duration of wind as well as about global wind patterns,[citation needed|Have we discovered more information since the first draft of this article?] an experimental setup and additional explorations on Mars are needed to evaluate their efficiency.

Even so, the data from the Viking and Pathfinder missions did not include findings from dust storms, which computer modeling and wind tunnel tests have shown can only be created and sustained by high levels of winds.[1] This leads to the possibility of wind turbines which exclusively operate during dust storms,[1] supplementing solar power during the very storms which impede their efficiency. NASA AMES tested a 100 kW wind turbine at their Antarctica station; while this site serves as a general Mars analog due to its harsh conditions, the thin atmosphere was obviously not recreated, and the turbine itself was far too large and heavy for current science missions.[4] A more recent study argued for the feasibility of electricity generation via wind power even outside of dust storm conditions: researchers tested a sample turbine constructed out of parchment paper, straws, wood, and LEGOs in a wind tunnel simulating typical atmospheric conditions on Mars.[5] The experiment utilized a variety of wind speeds based on those found at the Phoenix polar landing site (roughly 2-6 meters/second), finding that more efficiently-constructed turbines could theoretically power a lander equal or smaller in size to the Mars Pathfinder.

If wind turbines are confirmed to be of value, most, if not all, of the components could be fabricated using Martian resources.[citation needed]

Windblown dust could clog up moving parts. Also, maintenance could be expensive, as abrasion cannot be completely avoided. Lubricant may be difficult to produce on Mars and might act differently due to environmental conditions; hence, a nonlubricant-based construction such as pure magnetic bearings without direct contact may be required. 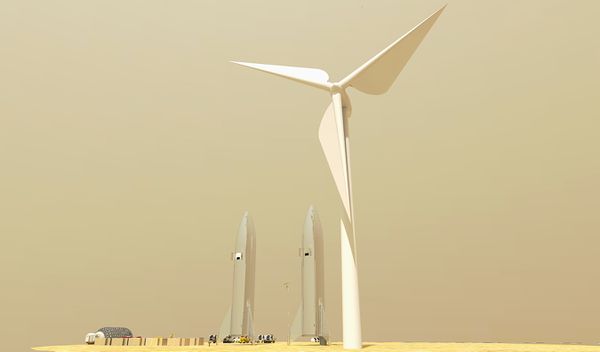 For the above parameters a typical large windmill on Earth produces 12W/kg, where the mass includes blades, generator and tower. This is less than the 33 W/kg that can be reached by solar on Mars, but the availability may be higher. In particular, during dust storms on Mars the available solar power is very low but the average air speed is higher. As the power is to the cube of the air speed, the average wind power per kg would then be about equal to the sun power per kg, making the two forms of energy complementary. So a martian settlement might want to have a mix of solar and wind to increase its diversity of power sources.