From Marspedia
(Redirected from ISS)
Jump to: navigation, search 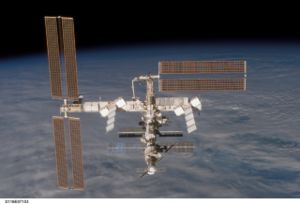 The International Space Station in Earth orbit. Construction is expected to be complete in 2010.

The International Space Station (ISS) has a low Earth orbit with an altitude of between 319.6km (at perigee) to 346.9km (at apogee). The ISS is the sole manned space station orbiting the Earth carrying out experiments and observations. The first section of the station was put into orbit in November 1998 by a Russian Proton rocket. The first crew arrived on 2 November, 2000.

The ISS is a major stepping stone toward future manned missions to the Moon and Mars. It could be an invaluable base of operations outside Earth's gravity and will provide valuable data for the human response to the zero-G environment, aiding the science behind human biology during prolonged periods in space.

The ISS is planned to be retired by 2028. It's functions may need to be carried out by a new platform.