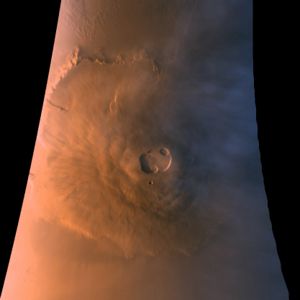 Olympus Mons is a dormant shield volcano in the Tharsis region of Mars. It is easily the tallest volcano on Mars, and is believed to be the tallest in the Solar System.

The top of Olympus Mons is the highest point on Mars. By one measure, it has a height of nearly 22 km (13.6 mi or 72,000 ft).[1]. Olympus Mons stands about two and a half times as tall as Mount Everest's height above sea level, and is currently the largest volcano discovered in the Solar System.

At 600 km (370 mi) in diameter the footprint of Olympus Mons covers an area of land comparable to the size of France. 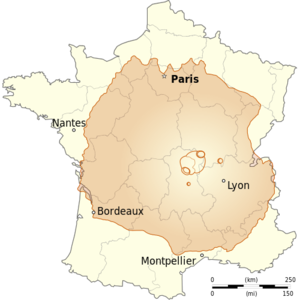 Olympus Mons compared to the country of France

It is the youngest of the large volcanoes on Mars and some of the evidence from the ancient lava flows suggest a range in age from 115 million years old to 2000 million years old. This is relatively recent in comparison to most of Mars' other geology.

Much of the terrain is obscured by fine dust covering the underlying bedrock but Olympus Mons probably has the same composition to most of the dark areas on Mars which were formed by volcanic eruptions. The surface of Mars, including Olympus Mons is basalt of a type (tholeiites) similar to that of Earth's oceanic crust. This is the general conclusion drawn from Martian meteorites, analyses of soils and rocks at robotic landing sites, and information gathered with orbiting spacecraft.[2] [3]

Lava flows consisting of this composition would have low viscosity producing a watery flow that creates a typical shield volcanoes. Olympus Mons has a very gradual slope of, on average, only 5°.[4] It would be a long but very gentle climb up Olympus Mons. 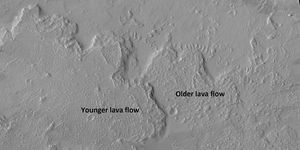 Lava flows from Olympus Mons, as seen by HiRISE

High-altitude clouds frequently drift over the Olympus Mons summit, and airborne Martian dust is still present.[5] The typical atmospheric pressure at the top of Olympus Mons is about 12% of the average Martian surface pressure.[6]

As with tall mountains on the Earth, there has been much snowfall on Olympus Mons. Scientists see much evidence for glaciers.[7]

Olmypus Mons has been known to astronomers since the late 19th century as the albedo feature Nix Olympica (Latin for "Olympic Snow"). Its mountainous nature was suspected well before space probes confirmed its identity as a mountain.[8]

Unfortunately Olympus Mons is an unlikely landing location for automated space probes in the near future. The high elevations preclude parachute-assisted landings because the atmosphere above is not sufficient to slow the spacecraft down before landing. Moreover, Olympus Mons stands in one of the dustiest regions of Mars. This would likely make rock samples hard to come by and the dust layer would also likely cause severe maneuvering problems for rovers.[9]