These systems scrub CO2 from the air by bringing it into contact with a substance which attaches itself to the CO2 in a chemical reaction. Scrubbers can accomplish this with soda lime (a mixture of chemicals including calcium hydroxide, sodium hydroxide, and potassium hydroxide), amines (a derivative of ammonia), or potassium superoxide (a substance used in firefighter and mining rebreathers), but the low molecular weight—and therefore transport costs—of lithium hydroxide (LiOH) has led to its popularity aboard spacecraft.[2][4] This reaction creates lithium carbonate (Li2CO3) and water through the following reaction: 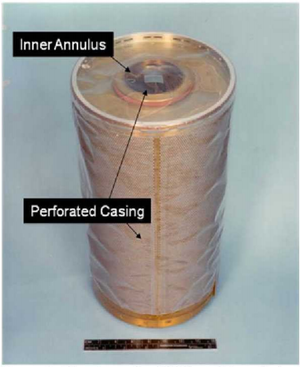 The conversion to Li2CO3 is irreversible, meaning that the canisters used for the reaction must be replaced once all of the LiOH is consumed.[5]

Apollo 13 provides perhaps the most famous instance of complications arising due to this replacement process:[2] an explosion in the command module forced all three crewmembers into the lunar module, whose air recycling system was designed for two. The lunar module's LiOH canisters quickly became saturated, and the crew had to improvise extensive modifications using hoses, socks, plastic bags, and duct tape in order to adapt the command module's square canisters to the round lunar module system.

In addition to the Apollo program, LiOH canisters constituted the primary CO2 removal system during Mercury, Gemini, and Space Shuttle missions.[1] One canister acted as the primary scrubber, with another in place as a backup; as the primary canister became depleted, the backup took over and the primary was replaced, with this alternating cycle repeating as many times as necessary until the crew returned to Earth. The longer the mission, the more canisters required.

Scrubbing the CO2 which a single crew member exhales over the course of a day requires roughly 1.5 kilograms of LiOH.[1] Modern LiOH canisters used by NASA contain 3.0 kilograms of LiOH pellets, and the water created during the chemical reaction brings the weight of a depleted canister to around 4.0 kilograms.[1][5] Russian Soyuz canisters are almost twice as large. This weight, along with the size of the canisters (approximately 6 liters in volume), adds substantial considerations not only to the cost of launching from Earth, but also to returning, since the canisters are not jettisoned into space.[1]

Because the number of required canisters increases in direct proportion to mission length, regenerative CO2 scrubbers become more cost effective than a system based on consumable LiOH after a period of 20-30 days.[6] Skylab and Mir still employed LiOH canisters in a supplementary capacity, as does the International Space Station, which maintains a minimum contingency reserve capable of sustaining 3 crew members for 15 days, as well as a stockpile from which docking craft can draw when payload requirements restrict the amount available for their own scrubbing needs.[1] The primary system employed on the ISS, however, utilizes regenerative filtering technology.

The chief advantage of a biological recycling system over a mechanically-sustained one is simple: plants don't break. Where a machine might suddenly cease to function and require expensive parts shipped from Earth, nature has largely optimized self-repair via evolution. Given the relatively simple level of technology involved in proper lighting, plumbing, and pumps, and provided that no pests or insects are introduced to the sterile conditions of space, plants could potentially be far more reliable than artificial CO2 scrubbers.[7] Furthermore, the right plants could also double as a food source for astronauts or colonists.

Several closed-ecosystem experiments conducted on Earth have investigated the viability of a plant-sustained air recycling system. In the 1970s, the BIOS-3 facility in Siberia found that 8m2 of Chlorella algae could maintain the 02/CO2 balance for one individual in a 315 m3 environment.[8] 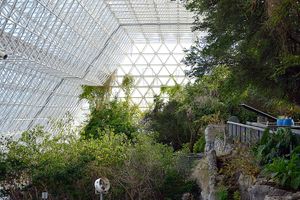 The Biosphere 2 project in Arizona attempted a larger-scale project over the course of 2 years, sealing 8 participants in a 180,000 m3 facility with an artificial ecosystem.[9] The facility operated in mostly closed-loop conditions, but was exposed to natural sunlight. Daily variance in this light caused CO2 levels to fluctuate substantially according to the relative activity of photosynthesis: while CO2 concentrations dropped during the day, they rose sharply at night when respiration predominated. Seasonal variation was similarly evident, with levels rising in low-light winter months and on cloudy days, while longer sun exposures corresponding with summer months resulted in lower concentrations. December, for example, averaged CO2 levels over twice as high as those in June, with the two months differing by up to 5 hours of sun exposure at their extreme ends.

The project utilized various methods to attenuate the effects of this variance, including CO2 sequestration via calcium carbonate precipitation, lowering nighttime temperatures to reduce respiration, and storing trimmed biomass in dry areas to slow its decomposition. Notably, an unanticipated, steady decline in oxygen levels⁠—which required the artificial injection of fresh oxygen after dropping to a point where team members were suffering symptoms of altitude sickness⁠—was attributed to additional microbial respiration from organically-enriched soil.[10] Unsealed concrete in the habitat absorbed the CO2 released by this respiration, and therefore prevented its re-conversion into oxygen via photosynthesis.

With further investigation, these plant-based systems could potentially fill the air-recycling needs of future space expeditions. Biological means have yet to feature as the primary form of CO2 scrubbing for spacecraft due to a variety of reasons including mass constraints, the number of plants required per individual, and the energy costs of optimized lighting and air conditioning.[9][6] The International Space Station, for example, has plants aboard, but not in the quantities necessary to have any appreciable impact on CO2 concentrations.[11]

Yet, the above experiments hint at the possibility of an exclusively bioregenerative system. The ISS has a habitable volume (388 m3) slightly larger than the 315 m3 environment of the successful BIOS-3 experiment, and a pressurized volume on the order of 3 times as large at 932 m3.[12] The BIOS-3 experiments supported up to 3 individuals for 180 days,[8] meaning that the ISS could theoretically recycle air for a crew of at least 8.[7]

The algae in these experiments used 18 kW of artificial lighting per person; extrapolating this to 108 kW for a crew of six on the ISS—which could not rely on natural light alone due to regularly being in darkness—would consume the majority of the 120 kW generated by the station's solar arrays.[7][13] The Russian lamps, however, used xenon technology,[7] which is anywhere from ½ to 10 times less efficient than modern LEDs in terms of lumens generated per watt.[14] More efficient lighting could therefore theoretically reduce the energy requirements to somewhere between 11-54 kW, a much more feasible range considering the power output of the ISS.

Given the mass requirements of a plant-based system, such methods are perhaps better suited to future habitats on Mars. In-situ resource utilization techniques will allow colonists to avoid shipping large quantities of water, soil, or oxygen, all of which can be obtained on site.[9] Hydroponic and aeroponic systems provide alternatives to any complications posed by the use of Mars regolith in a soil-based system, although this soil does contain all the nutrients necessary for plant survival once existing perchlorates are removed.[15]