A carbon nanotube is one or more concentric sheets of graphene rolled into tubes. They are amongst the stiffest and strongest materials known to mankind and their electrical properties can be varied from metallic to semiconducting.[1] 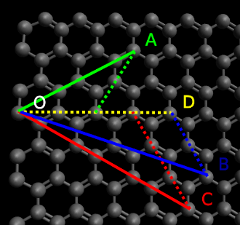 Carbon nanotubes are classified according to their concentricity, tube thickness and chirality (or zigzag/armchair status, if not chiral). There are also a number of interesting nanotube-derived materials.
Figure 1 is a graphical depiction of how carbon nanotubes are equivalent to rolled-up graphene. In each of the colours, the solid line (overlapped by the dotted line for yellow) depicts a perpendicular cross-section of the nanotube. (This means that the axis of the tube runs at a right angle to that line.) The two dotted line indicates how the characteristic vector (n, m) of the nanotube is calculated. n is the number of hexagons the horizontal line (which corresponds to a zigzag nanotube) cuts through and m is the number of hexagons that the second dotted line cuts through. (n,m) is (2,2) for A, (4,2) for B, (3,3) for C and (4,0) for D. The tesselation wraps around so that the hexagon centred on O takes the place of the hexagons centred on A to D, respectively. The angle theta indicates how strongly the nanotube spirals, but not whether it is left-handed or right-handed (if chiral) nor how thick it is. 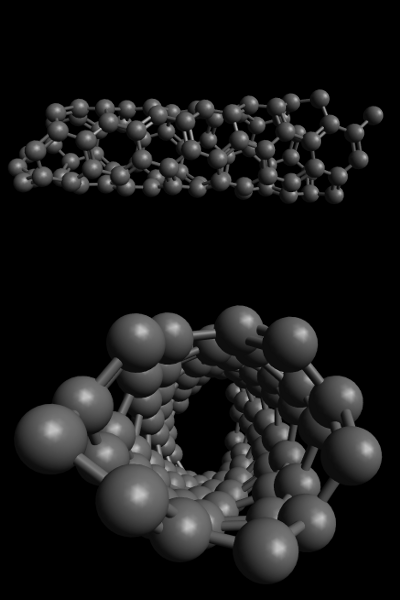 , the (absolute value of the) angle at which it is twisted (relative to a zigzag nanotube) when this tube is conceptually made from a sheet of graphite.

To more fully describe a carbon nanotube, the value

can be used. The values of

are the widths of the hexagons which make up the nanotube, measured respectively in the directions in which n and m are measured (see Figure 1).

is the Manhattan distance for one full revolution around the tube. For zigzag nanotubes,

and for armchair nanotubes,

.
Figure 2 illustrates a left-handed SWNT (4,2). Note that if you were to complete the partially cut-off hexagon on the right of the side-view and then continue with those that follow, you would spiral to the right according to the left-hand rule.

It is sometimes desirable to modify carbon nanotubes to make them soluble in either water or organic solvents, bond them to another material or perform some other function.
One of the ways to achieve this is to react the carbon nanotubes with chemicals, such as fluorine, which can bond to their surface. Since each carbon atom has a double bond with one of its neigbours, it is possible to bond carbon nanotubes to other molecules or elements without disrupting the physical structure. However, this reduces electrical conductivity.[1].

Commercial production of carbon nanotubes takes place by chemical vapour deposition, laser vaporisation (of graphite) or electrical arcing between graphite electrodes[1]. The electric arc method tends to create MWNTs. Lengths produced are currently in the micrometre range, while thicknesses vary from about 1nm for the thinnest SWNTs and 100nm for the thickest MWNTs[1]