Note that the lowest energy cosmic rays have similar energies to the highest energy particles from the sun, so the two blend into each other. Strategies to mitigate the strongest solar events will help with the weakest cosmic rays.

Since cosmic rays come from every direction, being on a planet will automatically halve your cosmic ray dose compared to deep space, since half of the sky is blocked by the planet beneath your feet.

On Mars, about 1.6% of cosmic rays are absorbed by the thin atmosphere, (pretty good considering the air is 0.6% as thick as Earth). Therefore radiation shielding is required for the habitats. 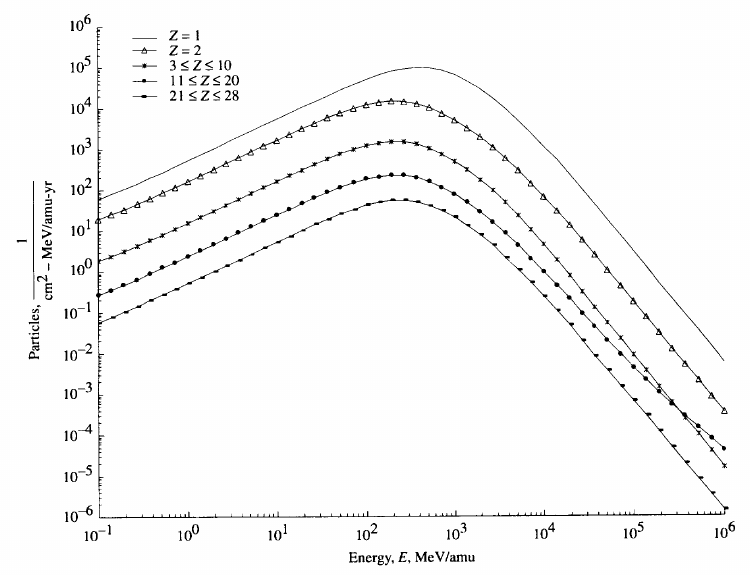 Energy distribution of cosmic radiation, as measured during the 1977 solar minimum.[3]

Variation because of the solar cycle

This change in radiation is significant, the radiation increase between the very lowest and strongest solar cycles is ~75% (tho ~34% is more typical).[4] This suggests that we can profitably trade off lower cosmic ray doses for higher solar radiation doses by launching missions during solar maximum.

The sun for the last few decades has been unusually cool, so the the cosmic ray dose is relatively higher than, say, a century ago.

Cosmic rays when they hit Mars' soil will set off secondary radiation including free neutrons (called albedo neutrons). This is a radiation source which is very low on Earth. Water, plastics, or substances such as Lithium Hydroxide would help absorb these neutrons for long term settlements. [5]