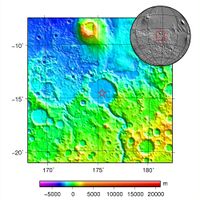 Image of the Gusev Crater

Spirit found the rocks on the plains of Gusev to be a type of basalt. They contain the minerals plagioclase, olivine, pyroxene, and magnetite. The rocks look like fine-grained basalt with irregular holes (geologists would say they have vesicles and vugs).[2] [3]

Much of the soil on the plains came from the breakdown of the local rocks. Fairly high levels of nickel were found in some soils; probably from meteorites.[4]

There is evidence that the rocks have been slightly altered by tiny amounts of water. Outside coatings and cracks inside the rocks suggest water deposited minerals, maybe bromine compounds. All the rocks are covered with a fine coating of dust. One type can be brushed off, while another needed to be ground off by the Rock Abrasion Tool (RAT).[5]

The dust in Gusev Crater is the same as dust all around the planet. All the dust was found to be magnetic. In addition, Spirit found the magnetism was due to the mineral magnetite, especially magnetite that contained the element titanium. One magnet was able to completely divert all dust hence all Martian dust is thought to be magnetic.[6] The spectra of the dust was similar to spectra of bright, low thermal inertia regions like Tharsis and Arabia that have been detected by orbiting satellites. A thin layer of dust, maybe less than one millimeter thick covers all surfaces.[7] [8]

Scientists found a variety of rock types in the Columbia Hills The rocks were put into six different categories. The six are: Clovis, Wishbone, Peace, Watchtower, Backstay, and Independence. They are named after a prominent rock in each group. Their chemical compositions are significantly different from each other.[9] Most importantly, all of the rocks in Columbia Hills show various stages of alteration due water.[10] They are enriched in the elements phosphorus, sulfur, chlorine, and bromine—all of which can be transported in water solutions. The Columbia Hills’ rocks contain basaltic glass, along with varying amounts of olivine and sulfates.[11] [12] [13] The olivine abundance varies inversely with the amount of sulfates. This is exactly what is expected because water destroys olivine but helps to produce sulfates. 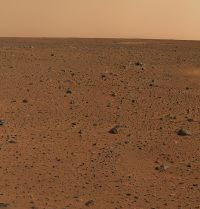 The crater exhibits evidence that it once contained substantial quantities of liquid water. A channel enters the south of the crater. Known as Ma'adim Vallis, this was almost certainly a means for which the crater was supplied with water. On January 9th, 2004, the Spirit rover landed in the crater and began to analyse the surrounding rock. Expecting to find overwhelming evidence of an ancient lake, mission scientists were disappointed to find very little indication of water.

Although this was unexpected, during the trip to the Columbia Hills, Spirit eventually found evidence that the area had once held a quantity of saltwater.[14][15]