When the pictures from Mariner 9 were examined, scientists thought that with all the craters, Mars must be like the moon. Billions of years of bombardment would have caused the crust to be just broken up rocks they thought. However, this view did not hold up. Mars Global Surveyor from the beginning showed vast areas of layered rocks; layered showed up to 10 km deep in the Valles Marineris. Today, we believe layered is planet-wide. [1] [2]

Layers show up in the walls of craters.

Mars has spectular canyons and troughs where the ground has pulled apart due to the stress caused by the weight of giant volcanoes. In these places layers often run continually for long distances.

Many features resemble long river valleys similar to what is common on the Earth. Layering occurs along many of the walls.

Mesas and pedestal craters, a feature unique to Mars, often show layers. Both of these are the remains of layers that once covered wide regions. They often owe their existence to an erosion-resistant top layer. Sometimes it is from a layer of hard lava that covered everything. Cap rock, a name given to this hard layer, is seen to break into large blocks or boulders in some cap rocks.

Pedestal craters develop a protective top layer from the action of crater ejecta.

The insides of many craters contain layered deposits. They appear to have formed sometime after the crater was blasted into the surface. The Mars Curiosity Rover was sent to examine one of these formations. It quickly found rounded pebbles–strong evidence for running water. [3] [4] [5] Later, it was determined that indeed Gale Crater once held a lake. [6] [7] [8] [9] The lake in Gale, became full of sediments. Later, all but the center mound was eroded. However, there are other ideas that have been considered for the origin of Gale's mound.[10] [11] [12] [13]

Large masses of layered deposits in depressions, such as craters have been called Equatorial Layered Deposits (ELD’s) or Interior Layered Deposits (ILDs) in Valles Marineris.[20] They are often found with outcrops of hydrated sulfates on Mars. Hydrated sulfates are a sign of liquid water in Martian history since they need water to form. Based on albedo, erosion patterns, physical characteristics, and composition, researchers have classified different groups of layers in Gale Crater that seem to be similar to layers in other (ELD’s). The groups include: a small yardang unit, a coarse yardang unit, and a terraced unit.[21] Usually , ELD’s are found ~ ±30° of the equator.[22] Equatorial Layered Deposits appear in various geological settings such as cratered terrains (Arabia Terra, Meridiani Planum), chaotic terrains (Aram Chaos, Aureum Chaos), the Valles Marineris chasmata (and surrounding plateaus), and large impact craters (Gale, Becquerel, Crommelin). [23] [24] Layering is visible on meter scale, and when the deposits are partly eroded, intricate patterns become visible.[25]

Layers in Firsoff Crater, as seen by HiRISE under HiWish program

Another class of layers may have been created as ice-rich material fell from the sky when the climate changed. Because Mars has no large moon to stabilize its tilt, its tilt, and thus its climate vary greatly.[26] At times moisture from the poles enters the atmosphere, and freezes to form snow or ice-coatcoated dust. This ice-rich material collects at mid latitudes. It appears as a smooth covering, called latitude dependent mantle. After each climate change, some of the material stays behind, while much just returns to the Polar Regions. This repeated process results in layers in craters and in sheltered spots like against cliffs. Some of these formations have been shaped by the wind into various shapes. It must be pointed out that mantle is widespread on Mars and contains water ice. This ice can be a major source of water for future colonists.

We have known about layers in the northern ice cap for a long time. They record many past climate changes.

Although many sets of layers probably originated underwater, some researchers believe that some layered formations were created by a combination of sediment and ground water. [27] [28] [29] [30] [31] Sediment could be transported by the wind, volcanoes, or crater impacts. Water moving through the ground would easily pick up minerals like silica or sulfates that could cement the material. [32] [33] On Earth the hardness of many sedimentary rocks, like sandstone, is mostly caused by the type of the mineral cement that was put in place as water passed through. Some layers contain Gypsum, a sulfate which forms in relatively fresh water. [34] 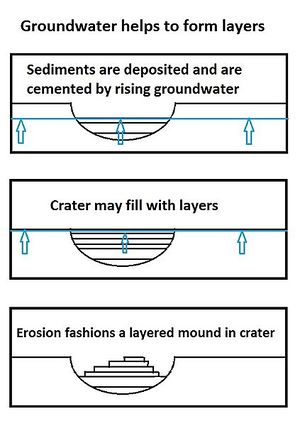 Layers may be formed by groundwater rising up depositing minerals and cementing sediments. The hardened layers are consequently more protected from erosion. This process may occur instead of layers forming under lakes.

Strong proof of groundwater cementing materials was discovered by Opportunity Rover. Places, examined by Opportunity such as Endurance, Eagle, and Erebus craters happened to be where the water table breached the surface.[35] [36] [37] In addition, it was found that sediment was transported by wind-driven currents of water in some locations. Groundwater rose and fell, as evidenced by small surface cracks formed during multiple wetting and drying events. Ferric sulfates (such as jarosite) in the rocks of Meridiani Planum indicate that acidic fluids were present. These acidic liquids could have been produced when water with dissolved Fe(II) was oxidized as it reached the surface.[38] Hydrologic models predict that groundwater should indeed emerge in the Sinus Meridiani region which was explored by Opportunity.[39]

What’s so great about layers on Mars

The widespread occurrence of layering on the Red Planet has great significance. On Earth, much layering originates in bodies of water.[40] If this is true, at least to some extent on Mars, then traces of past life might be found in layered formations. Indeed, much evidence has been gathered for the existence of lakes in craters and some canyons. Whether layers were created under water or through ground water, water is still involved. Most of the organic mass on the Earth is found under the surface.[41] [42] Many microbes live deep underground.[43] [44] [45] Life under the Martian surface might find it easier since it would be protected from high levels of radiation.[46] One recent study found that radiation from certain elements in the crust of Mars could have reacted with water in the ground to produce hydrogen. Hydrogen can supply chemical energy for life.[47] [48]