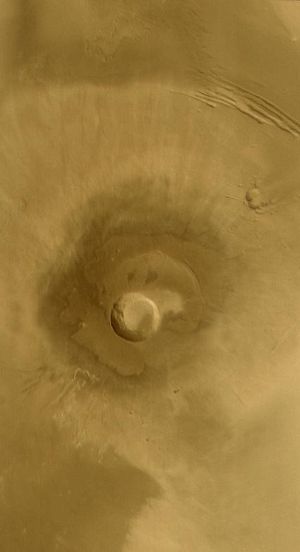 The name "Pavonis Mons" is a classical feature name and is Latin for "peacock mountain".[2] It is the middle member of a chain of three volcanic mountains (collectively known as the Tharsis Montes) that straddle the Martian equator between longitudes 235°E and 259°E (125 W -101 W). The volcano was discovered by the Mariner 9 spacecraft in 1971 and was originally called Middle Spot.[3] Its name officially became Pavonis Mons in 1973.[4]

Using Mars Global Surveyor (MGS) and Mars Odyssey data, scientists found much evidence that glaciers once existed on Pavonis Mons and probably still do to some extent.[5] [6] Evidence for this includes concentric ridges (moraines "dropped" by glaciers), a knobby area (caused by ice sublimating), and a smooth section that flows over other deposits (debris-covered glacial ice). The ice was probably deposited when the tilt of Mars changed the climate, thereby causing more moisture to be present in the atmosphere. Studies suggest the glaciation happened in the Late Amazonian period, but multiple stages of glaciation probably occurred.[7] The ice present today represents one more resource for possible future colonization of the planet.

An entrance to a cave in the form of an opening to a lava tube was found near Pavonis Mons.[8] Caves created from lava tubes could contain reserves of water ice or even life. They are possible locations for a cave settlement. With the low gravity of Mars, lava tubes may be over 800 feet in width. A lave tube on Mars could protect colonists from meteorites and radiation. Because of the lack of a magnetic field at present, Mars has a fair amount of radiation, especially from cosmic ray sources.[9] A mini-series produced by National Geographic in 2016 depicted how people could establish a base in a cave.[10] [11]

Pavonis Mons lava tube opening We may be living in lava tubes someday.

Being so high, and so close to the equator, Pavonis Mons has been suggested as a location for a Mass driver or Sky ramp. They could give some or most of the energy needed to get matter into orbit around Mars. This would significantly lower the cost of shipping materials to Earth, Luna, or the asteroid belt.