Sand is a natural granular solid substance composed of grains the size of about 0.05 mm to 2 mm. Sand grains are produced from mineral particles, rock fragments, and, on Earth, degradation of biological structure such as coral. Most sand is composed of silicate minerals, primarily quartz, or silicate rock fragments. Sand, being a natural mixture, is almost never pure. On Mars there is also a fair portion of iron oxide. Sand is unconsolidated. Sandstone is a rock made from consolidated sand.[1]

Fine sand is classified as silt, and even finer sans as clay(s). Clay is usually created by deposition in water, and has some transformation due to chemical weathering. Clay also includes hydrated minerals, and can contain valuable minerals for a Martian settlement.

Sand grains can separate out by density in either wind or water based environments. 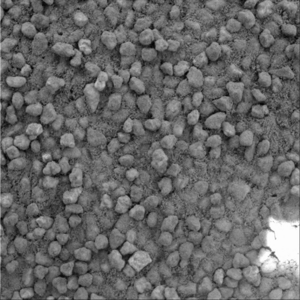 Sand is used for concrete, glass, and construction. Iron ore can be separated from its silica content and serve for metal production. Silica from sand can be used, after significant industrial processing including electrolysis and chemical separation, for the creation of solar cells.