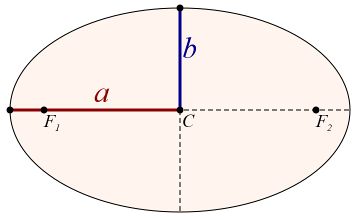 Prograde thrust (accelerating the body in the direction in which it is moving) increases the semi-major axis whereas retrograde thrust (in the opposite direction to its movement) decreases it. It is important to note that if no force acts on an orbiting body, it will return to the position where it last performed a maneuver. The opposite side of the orbit is most affected by any thrust whereas the orbit remains almost unchanged close to the point where the maneuver is performed.
Prograde and retorgrade thrust at either apsis of an orbit has the greatest influence on the semi-major axis, by moving the opposite apsis. This means that a spacecraft wishing to go from one circular orbit to a superior or inferior one can do so most efficiently by performing a Hohmann transfer (in the absence of other forces).

It is important to note that, when working with orbital energies, the energy is not the same as that required to hypothetically take a body to that orbit from either the surface or the center of the body it orbits. In fact, the specific energy of a satellite in elliptical orbit around the Earth is negative.
Since orbital mechanics only concerns itself with changes in orbital energy, the zero could be chosen arbitrarily. It is computationally most convenient to choose the value at escape velocity. This choice makes the semi-major axis inversely proportional to the specific energy and if the mass does not change also to the total orbital energy.
It follows that the orbital energy must be a negative value (since velocity is less than escape velocity) for elliptical orbits.