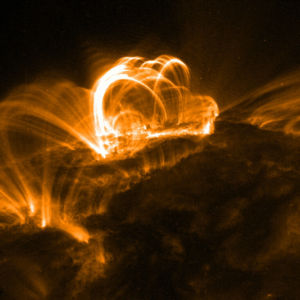 A flaring coronal loop system on the surface of the Sun

Solar flares are energetic, impulsive, magnetically triggered events on the surface of the Sun and low in the corona. A flare event may lead to Coronal Mass Ejections (CME) being expelled into interplanetary space. CME direct a huge number of charged particles in a 'narrow' stream away from the sun, and are a real Radiation danger if they hit you.

Solar flares are important for Mars as they create a dangerous radiation spike that can be important both for transportation to Mars and for martian settlements. Large solar flares may require the use of a radiation shelter, in particular for space transportation. On the martian surface, solar flares are part of the radiation load that governs the design of radiation shielding. Habitat designers might choose to have enough shielding everywhere to handle a huge Coronal Mass Ejection (CME), which is difficult & expensive, or have lower radiation protection everywhere, but build a small volume of high protection to protect people during a CME.

Note that we can see a solar flare developing, and can see if a Coronal Mass Ejection occurs, and in which direction it is heading. (The charged particles travel far slower than the speed of light, so we can see them coming.) So colonists will get warning that a solar storm is coming, and can return to base, or enter a Storm shelter before the radiation arrives at Mars.