From Marspedia
(Redirected from GFDL:Viking 1)
Jump to: navigation, search

Viking 1 was the first of two spacecraft sent to Mars as part of NASA's Viking Program. 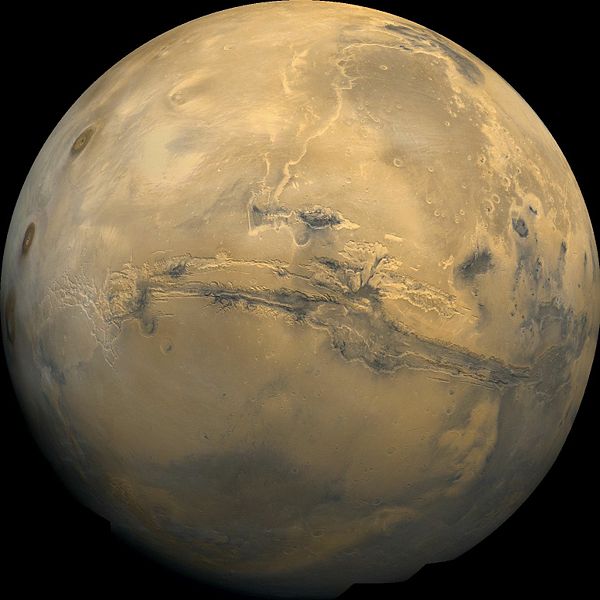 Following launch using a Titan/Centaur launch vehicle on 20 August 1975 and a 10 month cruise to Mars, the orbiter began returning global images of Mars about 5 days before orbit insertion. The Viking 1 Orbiter was inserted into Mars orbit on 19 June 1976 and trimmed to a 1513 x 33,000 km, 24.66 h site certification orbit on 21 June. Landing on Mars was planned for July 4, 1976, the United States Bicentennial, but imaging of the primary landing site showed it was too rough for a safe landing. The landing was delayed until a safer site was found. The lander separated from the orbiter on 20 July 08:51 UT and landed at 11:56:06 UT.

The orbiterexd primary mission ended at the beginning of solar conjunction on 5 November, 1976. The extended mission commenced on 14 December, 1976 after solar conjunction. Operations included close approaches to Phobos in February 1977. The Periapsis was reduced to 300 km on 11 March, 1977. Minor orbit adjustments were done occasionally over the course of the mission, primarily to change the walk rate (the rate at which the planetocentric longitude changed with each orbit, and the periapsis was raised to 357 km on 20 July, 1979.) On 7 August, 1980 Viking 1 Orbiter was running low on altitude control gas and its orbit was raised from 357 × 33943 km to 320 × 56000 km to prevent impact with Mars and possible contamination until the year 2019. Operations were terminated on August 17, 1980 after 1485 orbits.

The lander and its aeroshell separated from the orbiter on July 20 08:51 UT. At the time of separation, the lander was orbiting at about 4 km/s. After separation rockets fired to begin lander deorbit. After a few hours at about 300 km altitude, the lander was reoriented for entry. The aeroshell with its ablatable heat shield slowed the craft as it plunged through the atmosphere. During this time, entry science experiments were performed. At 6 km altitude at about 250 m/s the 16 m diameter lander parachutes were deployed. Seven seconds later the aeroshell was jettisoned, and 8 seconds after that the three lander legs were extended. In 45 seconds the parachute had slowed the lander to 60 m/s. At 1.5 km altitude, retro-rockets were ignited and fired until landing 40 seconds later at about 2.4 m/s. The landing rockets used an 18 nozzle design to spread the hydrogen and nitrogen exhaust over a wide area. It was determined that this would limit surface heating to no more than 1 degree Celsius and that no more than 1 mm of the surface material would be stripped away.

Transmission of the first surface image began 25 seconds after landing. The seismometer failed to uncage, and a sampler arm locking pin was stuck and took 5 days to shake out. Otherwise, all experiments functioned nominally. The Viking 1 Lander was named the Thomas Mutch Memorial Station in January 1982 in honor of the leader of the Viking imaging team.

The lander operated for 2245 sols, until 13 November 1982, when a faulty command sent by ground control resulted in loss of contact.[1] The command was intended to uplink new battery charging software to improve the lander's deteriorating battery capacity, but it inadvertently overwrote data used by the antenna pointing software. Attempts to contact the lander during the next four months, based on the presumed antenna position, were unsuccessful.[2]

In 2006 the Viking 1 lander was imaged on the Martian surface by the Mars Reconnaissance Orbiter. 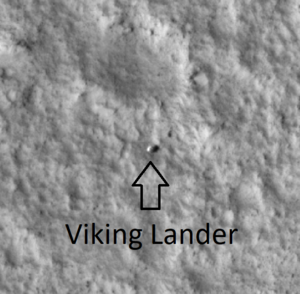 Viking 1 lander on surface, as seen by HiRISE