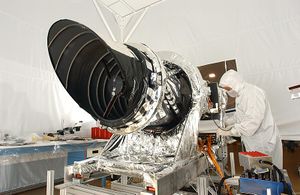 High Resolution Imaging Science Experiment is a camera on board the Mars Reconnaissance Orbiter. Ball Aerospace & Technologies Corp., under the direction of the University of Arizona's Lunar and Planetary Laboratory built the 0.5 m (19.7 in) diameter reflecting telescope.[1] It is the largest telescope to study Mars from orbit. Most of the time, HiRISE has orbited the planet in a nearly circular orbit to approximately 250 miles (316 Km) above the Martian surface, with a period of about 112 minutes.[2] [3] At this altitude it can take pictures of Mars with resolutions of 0.3 m/pixel (about 1 foot); hence it resolves objects less than a meter across. HiRISE is so powerful that it was able to spot Mars landers on the surface, including the ongoing Curiosity and Opportunity.[4] [5] [6]

Launched on August 12, 2005 by an Atlas V rocket from Cape Canaveral Air Force Station, the Mars Reconnaissance Orbiter (MRO) carrying HiRISE and other instruments arrived at Mars on March 10, 2006. However, it did not begin its main picture taking until November 2006. It began gathering data in November 2006 after completion of a long aerobreaking maneuver in the upper Mars atmosphere to place it in the desired orbit. The orbit has an inclination of 93 degrees, which means it orbits north and south in a polar orbit, as the planet turns beneath it.[7] As a result of the characteristics of its orbit, HiRISE takes pictures at about 3 p.m. local time. This time frame produces few shadows, but does avoid morning mist. To arrange for communications support during the arrival of the InSight Mission, a new Mars lander mission, the orbit was slightly modified on September 28, 2016 by a 75 second engine burn.[8] [9]

The following group of images shows some significant images taken by the instrument. Some of them hint at possible sources of water for future colonists.

Most pictures from spacecraft have some sort of enhancement. For many views of Mars there is not much contrast so the contrast is enhanced in a process known as stretching. The darkest parts are set to black while the lightest parts are set to be white. As a result of this process, many features appear much darker. Much of Mars is covered by a brown/red dust that gives little contrast. Pictures would be very bland.

The following back and white image is used to show the difference in colors--depending on how the image is processed.

HiRISE images are about 5 km wide with a 1 km wide band in the center that is in color.[12] Red color images are at 20,048 pixels wide (6 km in a 300 km orbit), and blue-green and NIR are at 4,048 pixels wide (1.2 km). These are gathered by 14 CCD sensors. HiRISE's onboard computer reads out lines of pixels in time with the orbiter's ground speed; consequently, pictures are potentially unlimited in height. However, height is restricted by the onboard computer's 28 Gigabit (3.5 GByte) memory capacity. The typical maximum size of red images (compressed to 8 bits per pixel) is about 20,000 times 126,000 pixels, or 2520 megapixels and 4,000 times 126,000 pixels (504 megapixels) for the narrower images of the B-G and NIR bands. A single uncompressed image uses up to 28 Gb. However, these images are transmitted compressed, with the usual size being 11.2 Gigabits. These images are released to the general public on the HiRISE website via a new format called JPEG 2000.[13] [14] The full image includes a scale bar of 500 or 1000 meter length.

The following set of pictures show first a full image of a scene and then enlargements from parts of it. A program called HiView can be used to produce more detailed views. Some pictures are in color. HiRISE takes a color strip down the middle only.

To facilitate the mapping of potential landing sites, HiRISE can produce stereo pairs of images from which the topography can be measured to an accuracy of 0.25 meter.

HiRISE compared to other cameras

HiRISE is basically a telescope in a low orbit around Mars; consequently, it can provide unbelievable views of the Martian surface. It is far better than all the other cameras that have gone there to look at the planet. This section displays pictures from a variety of cameras on past spacecraft.

The next two images compare pictures taken with 7 different cameras. HiRISE clearly has the best view of the surface.

As of March 9, 2016, the 10 year Anniversary of MRO, over 2.4 % of the surface has been examined by HiRISE. That is about the area of two Alaska’s. More would have been looked at, but many places were imaged multiple times to look for changes in things like sand dunes, gullies, and streaks. Pictures could contain up to 28 gigabits (Gb) of data. The highly successful mission of Mariner 9 changed many of our ideas about the Red Planet, yet it returned only 7,329 images with a total of 40 Gb of data, according to the final report. [15] [16] So just 2 HiRISE images may contain more than the entire Mariner 9 mission. At the time of this writing (8/14/20, HiRISE had taken 6,882,204 images, generating 194 terabytes of data sent from Mars since 2006.[17] On another note, the first image sent from Mars by Mariner 4 in the summer of 1965 only contained 240,000 bits.[18] One HiRISE image could contain 16,666 times as many bits as that Mariner image. One of the most amazing feats done with HiRISE was capturing dust clouds that were caused by blocks of ice tumbling down cliffs in the North Polar Layered Deposits.[19]

How to view images

Images can be seen at the HiRISE site at http://hirise.lpl.arizona.edu Clicking on the” Catalog” tab at the top will take you to all the HiRISE images. Clicking on the “Caption” tab takes you to hundreds of captioned images that are available in over 20 languages. If you know the image number, you type it in the search box to see it. To see spots in various enlargements, you can download the “HiView “ program that is found on the home page. The “map” tab will allow you to use a map to find HiRISE images of certain areas. For those interested in further understanding Mars, the “Science Nuggets” tab contains posters describing published research using HiRISE. “Updates” shows the latest captioned releases. To see interesting products made with HiRISE images check out the “Special Releases” tab. Several show rovers, such as Opportunity and Curiosity on the surface. One of the most beautiful products created with HiRISE are “Digital Terrain Models.” In a complex, time-consuming process images of the same spot on Mars are taken from slightly different angles. What results is a colorful topographic view. They can be seen with the “DTM” tab. Over 560 have been made so far.

There are several other ways of viewing images. Some allow you to just click on a map location to see what pictures that were taken by HiRISE. One such site is [[1]] http://global-data.mars.asu.edu/bin/hirise.pl Another is at [[2]] https://www.uahirise.org/hiwish/browse