Paraterraforming (or World House Design) is a subset of Terraforming where it takes place inside huge structures which may cover a large fraction of a world's surface. A key advantage is that the economic benefits of terraforming can be enjoyed much more quickly. __

Many people are concerned about long term Atmospheric loss on Mars, and by building huge structures this can be completely avoided. A large crater (say 10 km across), could have a 'tent pole' placed in the center of it, and then a transparent material could drape from the tent pole to the crater rim. Under this tent, atmospheric pressure could be increased, and it could be given a breathable atmosphere. Over time, more and more larger craters can be so engineered, until a significant fraction of the world is habitable. At this time, you could say that Mars has been Paraterraformed.

Note that anchoring a large pressure dome to the ground is challenging engineering. A tremendous amount of pressure is pushing upwards, so the dome, unless held down with huge force will blast away from the ground. Rather than having a full atmosphere of pressure, a lower pressure, oxygen rich atmospheres will likely be chosen. (For example, an atmosphere of 0.2 bar of oxygen, and 0.1 bar of nitrogen is breathable, but only would have 30% of the upward force on a large dome.)

Asteroids are far too small to have an atmosphere, but are close enough to Sol to allow the growing of crops. Let us say that we surrounded Ceres with a rigid, self-sealing, transparent dome. Everywhere the 'glass sky' would be a couple km above the surface. Under this planet-covering dome, a thick atmosphere can exist. 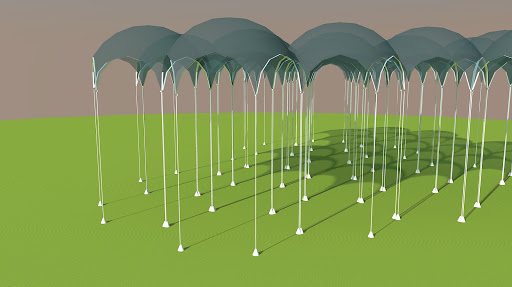 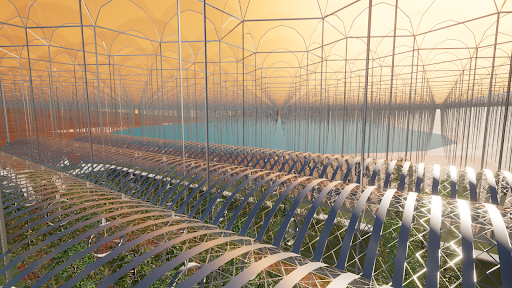 Eventually, a group of domes could grow into a shell world. As the domes become larger, their unit mass becomes heavier. Very large domes will eventually reach a unit mass such that the downwards force from the mass is equal to the force from the internal pressure. In such a case the structural tension disappears, except around the edges, and there is no fixed limit to the size of the dome. A planetary body entirely enclosed in such a structure is a Shell World[1].

Note that Paraterraforming and Terraforming can work together, making each other easier. If we increased the Martian air pressure to 10% that of Earth, we wouldn't need pressure suits to go outside (just breathing masks). However, this increase in air pressure makes it easier & cheaper to build large pressure structures with breathable atmospheres inside.