From Marspedia
(Redirected from Atmospheric mining)
Jump to: navigation, search 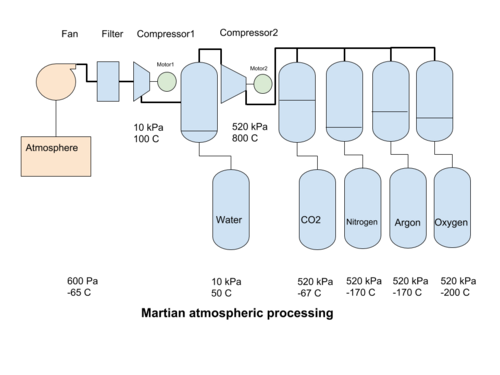 There are a number of ways the Martian atmosphere can be processed to separate it into its individual components for process use. Mechanical compression is one of the main possibilities for large scale operations. Chemical separation is an alternative that might be used for the same purpose.

In mechanical compression systems, a fan collects Martian atmosphere and passes it through filters to separate out the dust. Then a compressor increases the pressure of the atmosphere to reach a point when water can be condensed out. Then a second compressor increases the pressure to the liquefaction point of CO2. The liquid CO2 is removed, and the leftover gases can be cooled further, to condense out into their liquid phases.

In chemical separation systems using liquid amines or ionic liquids[1], the CO2 can be removed at atmospheric pressure, requiring only the N2 and Ar fractions to be compressed. 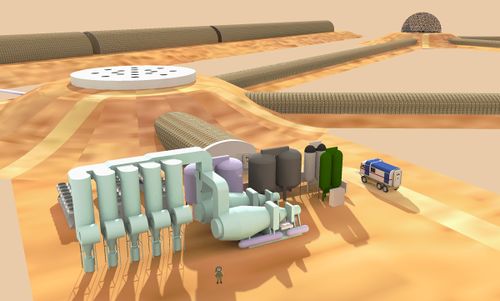 This is usually a two step process of separation and regeneration. In the primary separation vessel, the Martian atmosphere is passed through a reactor where the CO2 is removed by contact with the amine/ionic solution, that binds it to itself with light chemical bonds. The CO2 rich amine/ion solution is pumped to the regeneration vessel, where heat and pressure changes are applied, to break the link with the CO2 and liberate it as a gas. The separated CO2 can be removed by a compressor, and stored. The regenerated amine or ionic solution is free to capture more CO2, and is pumped back to the separator vessel and the reactor area. The reactor can take many forms, but generally the basic principle is to increase the surface contact area to increase the mixing of the CO2 and the amine/ion solution.

96% of the Martian atmosphere is Carbon dioxide. It can be used for hydrocarbon synthesis, including the production of methane based fuel. It can also be used to produce Oxygen through splitting of the H2O produced during hydrocarbon synthesis, or during the production of Carbon through the Bosch process. Alternatively, it can also be electrolyzed in a MOXIE, producing CO and O2 or used in farming.

Argon is useful for industrial processes that must be performed in an inert atmosphere. It can also be used for electric rocket propulsion. It may be used as a complement for nitrogen in a Martian settlement if it proves to be safe for that purpose.