Cost of energy on Mars 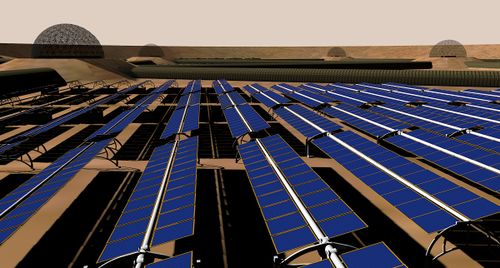 Solar array with a Mars settlement in the background. Just one possibility out of a large spectrum of choices, from flexible film unrolled directly on the ground to high powered nuclear reactors.

The cost of energy on Mars is one of the prime parameters required to analyse martian settlement scenarios. To go beyond generalizations and actually evaluate one scenario against another, the cost of energy and the cost of transportation to and from Mars need to be known, or at least estimated to compare on a common basis.

There can be no absolute answer to this question, as the cost of energy will vary depending on the source and the level of development of the colony. If all the energy producing equipment comes from Earth, the cost will be higher than if it is produced in-situ. As the settlement grows larger, economies of scale will come into play to reduce energy costs. As automation increases, and productivity increases accordingly, the cost of energy may go down significantly. Self replication of production equipment may eventually bring down the cost of energy to very small values. This will allow the realization of projects using energy on a scale that will be, literally, cosmic.

But before such a grand time comes, we can estimate a preliminary value for the cost of solar energy on Mars for a growing settlement of a few hundred to a few thousand settlers.

For this estimation we will use a solar panel array built on Earth with the following characteristics:

Transported by SpaceX Starship with other cargo and unfolded on Mars semi-autonomously. For the Cost of Transportation to Mars, we could simply use the cost proposed by SpaceX for their transportation system, 140 $kg to Mars. However, 500$ per kg to Mars may be a reasonable conservative choice, in particular if we apply it to all technologies.

The design is a tracking array. This allows for more energy production with the same peak power characteristics. The added complexity is estimated to be a small cost compared to the transportation costs from Earth. The moving mechanism would be fitted with elements allowing for a self cleaning phase for dust removal. The panels are mounted on a single rotating and extending boom, that allows for tight packing at transportation and can be unfolded using traction from a vehicle that can also serve to transport and set down the array, eliminating the need and mass of self extension mechanisms.

Note that 30% is not current but a projection. 22-24% would be closer to the performance of current cells.

The solar constant is estimated at 590 W/m2 over the whole year. Atmospheric dust losses are set at 20%. An additional surface dust factor of 10% is included. This lowers the solar illumination to 413 W/m2. Using solar tracking can provide peak power for about 7 hours for per day, the available energy per day is calculated as 413 W/m2 x 7h x 3600 s/h = 10 MJ.

The availability of the solar panels is estimated at 95%, to account for repairs, tracking failures and other problems.

This is not necessarily the selling price, as there might be taxes added or other costs, such as the distribution system costs. The price for energy might also be modulated; for example, the cost of night time energy, requiring the installation of energy storage systems, might be significantly higher. Or the cost of these storage systems could be factored into the base cost, if the settlement determined this was a useful policy.

This price also has a very broad range of uncertainty, as the cost of solar has been going down steadily, and the cost of SpaceX to Mars is pretty speculative.

Due to planet wide Martian dust storms, there are periods when solar power may be reduced significantly, or just not be available at all. A back up system will probably be required and the cost of this system should be factored into the cost of solar. This will tend to change the balance of costs in favor of nuclear energy.

Nuclear reactor designs for Mars might be based on the Kilopower[2] 10 kW nuclear reactor. It used Highly Enriched Uranium(HEU), presumably at 20% concentration.

Larger nuclear reactors would probably be more mass efficient. The energy required for in-situ production of enriched uranium is likely to be prohibitive compared to transporting the fuel from Earth. Mars is known to be low in nuclear materials, and the existence of enrichment mechanisms during the earlier periods of Mars' history are unknown. So it is impossible at this time to know if uranium ores would be available.