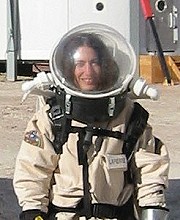 Judith is a space scientist of the human and health sciences domain. Her current work is in cyberhealth at the Universit&eacute; du Qu&eacute;bec in Hull, specializing in mission support strategies to improve human health and adaptation to extreme confined environments. She was in Antarctica in 1998 as part of her postdoctorate research program with the International Space University based in Strasbourg. She was also representing the Canadian Space Agency in 2000 during the longest international confinement experiment and has volunteered in July 2001 in mission support, Denver-Colorado for the FMARS missions of the Mars Society. Staying and working on MDRS with such qualified crewmembers is a privilege for her. It contributes also to knowledge development and it's the next best thing to a real trip to Mars! 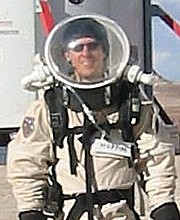 Andrew, with degrees in Planetary Geology and Environmental Science / Remote Sensing, has spent the better part of his 30 years inspired about exploration in its many forms, and he is working today to see that human futures beyond Earth are realized for the benefit of all people on Earth. In those moments where there is just nothing new available to explore, he loves to play soccer, and, well, just play, preferably with other primates. 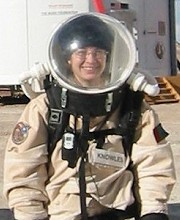 Jennifer is a Spacecraft Simulation Specialist at NASA Johnson Space Center in Houston, Texas. Upon graduating from college in 2000 with a B.S. in Physics she pursued her desire to work in the space program and relocated halfway across the country from the East Coast. She works regularly with the astronauts and hopes to become one herself in the future. Perhaps by then, with the help of the work being done now by Jennifer, the rest of the MDRS crews, and the Mars Society, Mars exploration will be a reality. 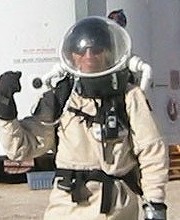 Joel is an information specialist from Moss Beach, CA and a staff writer for NewMars.com. Joel has lived many lives since attaining a BS in Geoscience from Penn State in 1980; including a brief career as a bassist-songwriter from the progressive rock band Jupiter Sheep. After several years developing a variety of internet skills, he's chosen to pursue his passion for exploring the secrets of planetary geology by returning to academia as a grad student this fall. Joel's 5 year old son Jeremy has been designated to personally locate a homestead for the family on Mars. 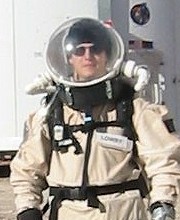 Matt is a high school physics teacher from Vernon Hills, Illinois. He has both a B.S. and M.S. in physics, with a certification to teach both physics and mathematics. He has been a supporter and advocate for the human exploration of space since he was a teenager, and in recent years he's become an active member of the Mars Society. In this regard, he is the chapter contact for the Chicago-area chapters of the Mars Society, and Matt also helps to maintain the Chicago chapter email list and website. When Matt's not teaching or imagining bouncing along the dunes of Mars, he enjoys practicing the Japanese martial art of Aikido, stargazing with his telescope, watching cheesy movies with his wife Carmen, and terrorizing and being terrorized by his cats - Sebastian, Sophie, and Meggie. 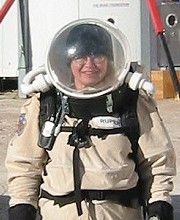 Shannon is a professor of biology from San Diego, California. Recognizing that no plant life is known to exist on Mars, she has shifted her research from plant breeding systems to finding life in extreme environments. She is an active member (and the only woman) of the San Diego Chapter of the Mars Society. She tells friends that she wanted to come to MDRS to wear the spacesuit and while that is true, a deeper reason is because she wanted to be part of something bigger than herself, something that could advance both science and humanity. She is an avid hiker, owns a small house in Anza-Borrego Desert State Park filled with Mars art and is currently building an observatory to house her 8 inch SCT telescope. She has been married for one week (!) and has a 20 year old son and 17 year old daughter.