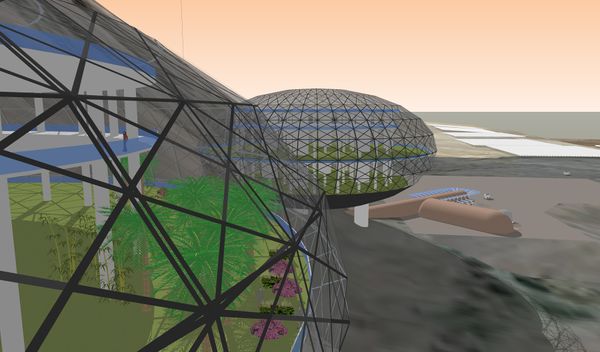 Large domed habitat. Any number of designs are possible, but designs need to take into account the larges forces created by the air pressure in the dome.

Geodesic domes on mars are a staple of the Mars settlement imagery.

There can hardly be an image of a Mars settlement without a dome in it, separating a green interior from the bleak red surface of Mars.

Domes on Mars need to be anchored against the internal air pressure. At ten tonnes per m2, large domes exert tremendous vertical pressure on the point where the dome meets the ground.

The vertical force is equal to the dome area above the ground. As a 100m dome covers about 7 800 m2, the vertical force for such a dome will be 78 000 tonnes of force, or about 250 tonnes per meter of perimeter wall.

Glass and metal domes are also rather poor for radiation protection. However, they might be excellent parks and leisure areas. Many authors have proposed ice domes, that offset the vertical force from the air pressure by the mass of the ice, with the added benefit that thick ice is an excellent radiation shielding material. NASA Langley has conducted research on the subject[1]. NASA has also sponsored 3D printing contests in which some proposals have used ice for construction[2].

The National Geographic MARS series shows a dome as one of the main living spaces of the Mars colony. Domes might serve as public spaces, or as parks.

The Ice house won the competition in 2015. The ice shell surrounds a lander and protects it from radiation, while providing an extension of the original vehicles living space. However the ice is not used as a pressure vessel, but as a radiation shield. 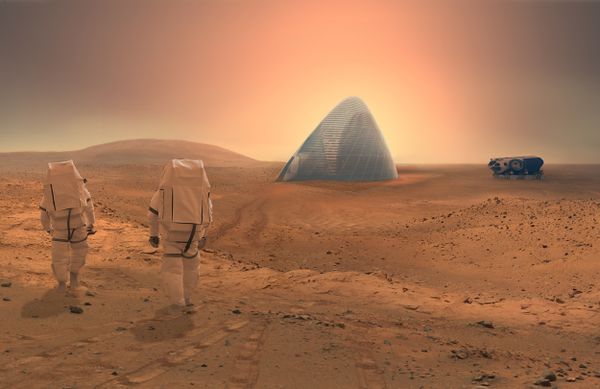