Holden is a 153 Km wide impact crater in the Margaritifer Sinus quadrangle (MC-19), located within the southern highlands at 26.4°S 34.0°W (326 E). It is named after American astronomer Edward Singleton Holden.[1] 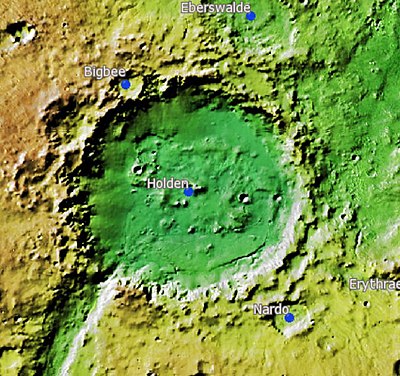 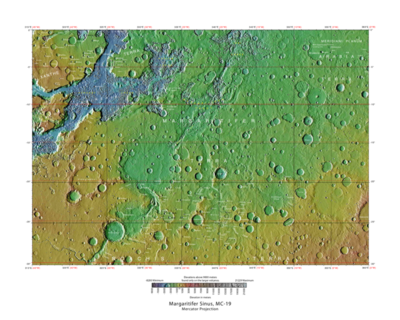 Holden is to the lower left of the Margaritifer Sinus Quadrangle

Like Gusev Crater, it is notable for an outlet channel that runs into it, and for many features that seem to have been created by flowing water. Uzboi Vallis once brought water into Holden Crater. Uzboi Vallis and Holdn are parts of the Uzboi-Landon-Morava (ULM) outflow system--a long series of channels and depressions that may have carried water across a major part of Mars. It's believed that Holden Crater was formed by an impact during the Noachian or Hesperian periods.[2] [3] [4] The crater's rim is cut with gullies, and at the end of some gullies are fan-shaped deposits of material transported by water.[5] The crater is of great interest to scientists because it has some of the best-exposed lake deposits. One of the layers has been found by the Mars Reconnaissance Orbiter to contain clays.[6] [7] Clays only form in the presence of water. There are two units of sediments in the crater. The lower unit formed in a large lake. It is believed that lake waters originated from the crater walls/or groundwater. Water from the crater walls may have come from precipitation when the Martian climate was different. The upper unit formed when water that was ponded to the south in Uzboi Vallis broke through Holden's rim.[2] It is believed that great amount of water went through the rim; one flow was caused by a body of water larger than Earth's Lake Huron.[8] [9] One proof for such a large flow of water is the presence of boulders tens of meters in size sticking above the surface. To transport such huge rocks takes a great deal of water. Holden is an old crater, containing numerous smaller craters, many of which are filled with sediment. The crater's central mountain is also obscured by sediment. Holden Crater was a proposed landing site for NASA's Mars Science Laboratory, until Gale Crater was deemed a better landing site. Just to the north east of Holden Crater is Eberswalde Crater which contains a large delta. The lower beds of Holden are thought by some to maybe similar to materials in Eberswalde Crater.[10] [11] Holden Crater was also considered a potential landing site for the Mars 2020 rover. In the second Mars 2020 Landing Site Workshop it survived the cut and was named to be among the top 8 sites still in the running for the landing.[12] However, in the end, Jezero Crater was picked. Lakes probably existed in both Jezero and Holden Craters.

Studies of the whole region around Holden Crater have resulted in an understanding of a complex sequence of events that shaped the crater, which included two different lakes.[13] A large series of rivers called the Uzboi-Ladon-Morava (ULM) system drained water from the Argyre Basin, a site of a large lake.[14] [15][16] When an impact occurred and produced Holden Crater, the system was blocked by a crater rim almost a kilometer in height. Eventually water from drainage from the walls, with possibly a contribution from groundwater, collected to make the first lake.[17][18] [19] This lake was deep and long lasting. The lowest level of sedimentary rocks was deposited in this lake. Much water was inbounded in Uzboi Vallis because the rim of Holden Crater blocked the flow. Some of the backed up water came from Nirgal Vallis which had a discharge of 4800 cubic meters/second.[20] At a certain point the stored water broke through the rim of Holden and created a second, shorter lived lake 200–250 m deep.[21] Water with a depth of at least 50 m entered Holden at a rate that 5-10 times the discharge of the Mississippi River.[22] [23] [24] Terraces and the presence of large rocks (tens of meters across) support these high discharge rates.[17] [25] [26] [27] [28] [29]