Noctis Labyrinthus is a group of intersecting canyons that lies at the western end of Valles Marineris. It is in the Phoenicis Laus quadrangle. The center coordinates of Noctis Labyrinthus are 7.0 S and 102.2 W (257.8 E). It has a diameter of 1190.31 km.[1] The canyons of this feature are faults known as grabens. Grabens happen when a center section drops lower than sections on either side.

Discovered by Mariner 9, the name "Noctis Labyrinthus," means "the labyrinth of the night." The name was approved in 1973.[2] 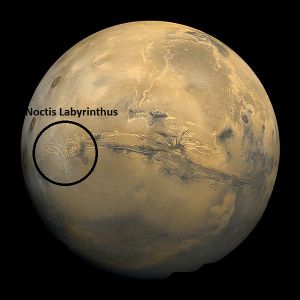 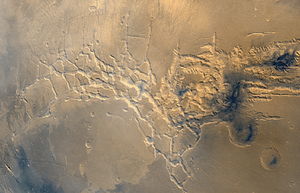 Many spacecraft have found a large number of layers exposed in craters, canyons, and various depressions. Noctis Labyrinthus displays many layers both in its walls and on floor deposits. Layers can be formed in many ways such as volcanic flows, volcanic eruptions, wind blown dust, and under bodies of water. Layers that break up into large boulders or blocks are thought to be formed from hard rock like basalt from the many volcanoes on the planet. In many places, however, the layers are seen to consist of fine particles. The wind often carries these small particles away in time. The fine particles are interesting; they could be made of clay which requires water for its formation. Indeed, spectroscopes onboard orbiting spacecraft like the Mars Reconnaissance orbiter have detected clay in some of the layers.

The idea that layers in Noctis Labyrinthus contain clay is exciting. It implies lots of water in the past. Life may have originated when some of these layers were put down. The water may have been under a lake, but it also may have come from the ground. Layers can be hardened by the action of groundwater, and thereby become more resistant to erosion. Martian ground water may have traveled hundreds of kilometers, and in the process dissolved many minerals from the rock it passed through. When ground water surfaces in low areas containing sediments, water evaporates in the thin atmosphere and leaves behind minerals as deposits and/or cementing agents. Hence, layers composed of just dust after being cemented could form a hard lyer that does not easily erode away.

The pictures below show some of the layers in Noctis Labyrinthus. The picture to the left below is a context image for Mars Global Surveyor. Part of the area under the rectangle is enlarged in the image below right. 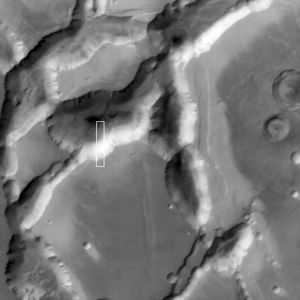 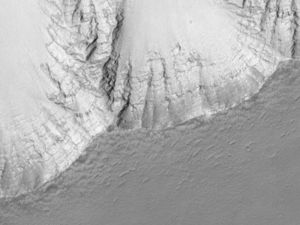 Close view of Noctis Labyrinthus This is an enlargement of the area in the box in the image to the left.

Research from 2009 found a variety of minerals, including clays, sulfates, and hydrated silicas, in some of the layers.[3] These minerals are associated with water. The water may have been from a body of water or may have come from groundwater. Since water had to be involved in their formation, evidence of ancient or existing life may be found there. On the Earth the hardness of many sedimentary rocks, like sandstone, is largely caused by the cement it contains. 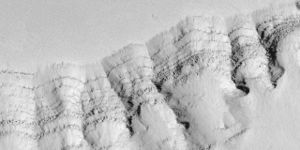 The picture on the left shows a close, color view of layered material found on the floor of Noctis Labyrinthus with HiRISE. These layers may have formed by groundwater or under a lake that was once in this region. The picture on the right is of layers near the top of Noctis Labyrinthus. HiRISE reveals many layers. The ones that contain large boulders probably were deposited as lava flows of basalt.

Close view of layers on floor of Noctis Labyrinthus with HiRISE