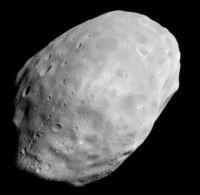 A Mars Global Surveyor image of the moon Phobos.

Phobos is the larger inner moon of the Mars system (the other, smaller moon is called Deimos). It is a dark body that appears to be composed of carbonaceous surface materials. Phobos' density is too low to be pure rock, however, and it is known to have significant porosity. These results led to the suggestion that Phobos might contain a substantial reservoir of ice. Spectral observations have ruled out the presence of water on the surface.

Phobos is highly nonspherical, with dimensions of 27 × 21.6 × 18.8 km. Because of its shape alone, the gravity on its surface varies by about 210%; the tidal forces raised by Mars more than double this variation (to about 450%) because they compensate for a little more than half of Phobos' gravity at its sub- and anti-Mars poles.

The Soviet spacecraft Phobos 2 reported a faint but steady release of dust particles from Phobos, but the spacecraft failed before it could determine the nature of the material.[2] Recent images from Mars Global Surveyor indicate that Phobos is covered with a layer of fine-grained regolith at least 100 metres thick; it is believed to have been created by impacts from other bodies, but it is not known how the material stuck to an object with almost no gravity.

The orbit of Phobos is not constant. Tidal forces consume a certain amount of energy and lead to an annual loss in height of about 18 mm. Eventually, in some million years, the moon might drop onto the surface, destroying any colony. But there are concepts to mitigate the threat.

It is also possible that Phobos will break up into a planetary ring once its orbit reaches the Roche Limit at about 7000km.

If Phobos does indeed contain volatiles, it could be mined for use by settlements on Mars, Luna, or Earth orbit. Sale of Phobos resources could be an important part of interplanetary commerce.