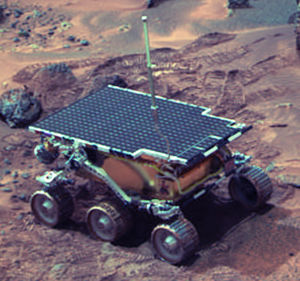 The tenacious Sojourner rover exploring the Martian surface after deployment by the Mars Pathfinder lander.

The Sojourner Rover was the first robotic rover mission to explore the surface of Mars. Sojourner, which means traveller, was named after Sojourner Truth during a worldwide, year-long competition held by The Planetary Society of Pasadena, CA, and NASA's Jet Propulsion Laboratory for students writing essays suggesting a name for the pioneering robot.

The Sojourner rover was launched onboard the Mars Pathfinder mission on December 4, 1996 by a Delta II rocket just a month after the Mars Global Surveyor was sent to the Red Planet. After a 7-month voyage, Mars Pathfinder landed on Ares Vallis, in a region called Chryse Planitia on 4 July 1997.

The rover was very important to the history of robotic exploration of Mars and was the most significant step in robotic exploration since the Viking missions in 1976. The robotic probes of the Viking era were restricted to their landing location, whereas Sojourner had the ability to extend the reach of scientific instruments away from the primary landing site of the Mars Pathfinder mission. This was also significant as the Sojourner rover was the first wheeled robot to explore a planet beyond the Moon (the Soviet Union had succeeded in sending rovers, Lunokhod 1 and 2 to the Moon in the 1970's).

Sojourner had 15 mission objectives divided into three groups: Technology Experiments - which tested the performance of the rover itself, Rover Science Experiments - which included Imaging and use of the Alpha Proton X-ray Spectrometer (APXS) to study the surface composition, and Mission Experiments - which studied the effects of landing and the environment on the Mars Pathfinder lander. [1]