Transport from Earth to Mars

From Marspedia
(Redirected from Space travel)
Jump to: navigation, search 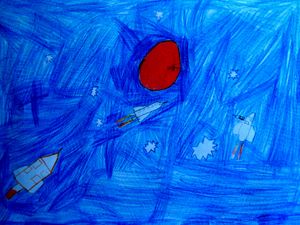 Mars missions require the transport of equipment, material and people from Earth to Mars, and possibly back to Earth. This page wants to clarify the needed transportation volume and the proposed technology.

Some explorations are needed prior to the actual start of the colonization. Mostly, this will be probes to collect data, radio-transmitted to Earth. Some may, however, need to bring material from Mars to Earth for deeper analysis.

A Martian settlement requires very much equipment, including energy generators and construction material for habitats and greenhouses. There are a few strategies for shipping:

Since most material is not prone to radiation damage, the trajectory of pure material transport can be optimized to lowest fuel consumption, helping to save costs.

For colonization of Mars the colonists are traveling only one way. The journey takes 6 month or less depending on the transportation system.

During the journey the astronauts are subject to radiation, which requires means to protect them. Cosmic radiation and solar wind cause DNA damage, which increases the risk of cancer significantly. The effect of long term space travel in the interplanetary space is unknown, but scientists estimate up to 19% probability for male persons to die of cancer because of the radiation during the journey to Mars and back to Earth. Together with the base probability of 20% for a male person on Earth to die from cancer this gives a probability of 35%. For women the probability is even higher due to their larger glandular tissues. [1]

Good radiation shielding means heavy space ships, and heavy space ships can not be lifted from a planet's surface to an orbit. The only possible way to use such a heavy space ship for more than just a handful of people is to keep it on a cyclic trajectory, commuting between Earth' orbit and Mars' orbit. Legacy rocketry can provide lifting and landing.

People need to eat, drink and breath during the journey. With currently known technology only a few persons can be brought to Mars with a single ship.

Artificial gravity through centrifugal force can be established in order to avoid health damage of the astronauts, although exercise is enough to prevent damage from zero-g.

Aerobreaking can be used to decelerate during approach when entering the orbit. Only small probes have touched down on the Martian surface up to now, using parachutes, balloon cushions and rockets.

A space elevator might be a possible solution for large amounts of material as well as for persons. The technology for building such a cable and vehicles to climb the cable has not yet been fully developed.