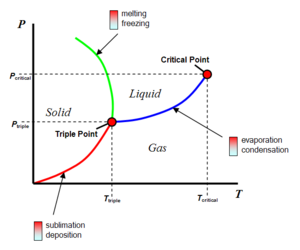 The phase diagram for water, clearly displaying water's triple point. The transition between solid to gas is known as sublimation.

Sublimation is the phase transition between solid and gas, without an itermediate liquid phase.[1] As the pressure and temperature of Mars is very low, water on the surface can only exist as ice or water vapour. In the phase diagram for water on Mars, temperatures and atmospheric pressure are close to the triple point of water. (On warm days it is well below the triple point.)

Some other examples of ice sublimated are snow slowly disappearing even in low temperatures. In addition, if ice cubes are left in ice trays for a long time in a refrigerator, they can be observed to get smaller and smaller until they disappear. This is an example of sublimation. Naphthalene, an organic compound commonly found in mothballs, sublimes easily because it is made of non-polar molecules that are held together only by weak intermolecular forces (Van der Waals). The element Iodine sublimates easily.[2] Often iodine crystals are found on the top lid of a bottle of iodine. The iodine sublimates from crystals at the bottom of the bottle and then are deposited on the top. So the iodine seems to go right through the air. In a way it’s like the transporter on board the Starship Enterprise—matter is transported from one place to another.

During the Martian winter CO2 frost is deposited at the winter pole. During the Martian summer CO2 ice sublimes from the summer pole. The amount of solid carbon dioxide (CO2) involved is enormous, where 30% of the atmosphere is deposited each Southern winter (and 12% during Northern winter).[3] [4] (In the summers, this CO2 sublimes.). This process causes great pressure changes and high winds.

Sublimation of water ice and dry ice cause many interesting landscape features on Mars. For examples of these forms go to Sublimation landscapes on Mars.