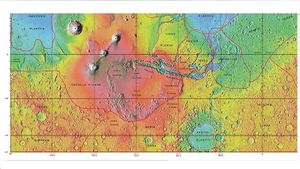 MOLA map showing boundaries of Terra Sirenum and other regions

Terra Sirenum (latin for "Sea of the Sirens") is a region located in the southern hemisphere of Mars (at 39.7 °S, 150 °W). Terra Sirenum covers a large landmass and at its longest extent spans 3900 km (2420 mi), approximating the distance from New York to Los Angeles. The region of Terra Sirenum contains many interesting features, including ones that probably contain water ice. Robotic machines may travel to Terra Sirenum to obtain water for future Martian colonies. Terra Sirenum is in the Phaethontis and the Memnonia quadrangles of Mars. A low area in Terra Sirenum is believed to have once held a lake that eventually drained through Ma'adim Vallis.[1] [2] [3]

Evidence from the Mars Global Surveyor MOC instrument that spurts of liquid water may sporadically flow on the Terra Sirenum region.

Concentric crater fill contains large amounts of ice under a cover of insulating debris.[4] Based on accurate topography measures of height and calculations of how deep the craters should be based on their diameters, it is thought that the craters are 80% filled with mostly ice.[5] [6] [7] [8] The ice accumulated in the crater from snowfall in previous climates.[9] [10] [11] Recent modeling suggests that concentric crater fill develops over many cycles in which snow is deposited, then moves into the crater. Once inside the crater shade and dust preserve the snow, the snow changes to ice. The many concentric lines are created by the many cycles of snow accumulation. [12]

Parts of Mars are covered by a smooth coating that in some cases is layered and quite thick. [13] It’s generally accepted that mantle is ice-rich dust that fell from the sky as snow and ice-coated dust grains during a different climate. > Some parts are eroded, revealing rough surfaces. [14]

Several features have been observed that have the shape of glaciers. Even though ice is not stable at many latitudes of Mars, ice could survive for long periods under a few meters of dirt and rock. [15] Some look like alpine or mountain glaciers of the Earth. [16] [17] [18]

An oxblow lake forms when a channel forms a short cut across a meander. The presence of an oxbow lake means that water flowed long enough to erode a meander before a cutoff was formed.

Oxbow lake, as seen by HiRISE under HiWish program.

Because of the many signs of ground ice, scientists have speculated for years that pingos may be found on the planet. Pingos form in ice-rich ground and contain a core of pure ice. However, we may not be sure if they are real pingos until they are examined by rovers. One picture below from HiRISE may be a pingo. The radial and concentric cracks visible here are common when forces penetrate a brittle layer, such as a rock thrown through a glass window. These fractures were probably created by something emerging from below the brittle surface. Ice may have built up under the surface in a lens shape; consequently making these cracked mounds. Since ice is less dense than rock, it probably pushed upwards on the surface and made these spider web-like patterns. A similar process creates similar sized mounds in arctic tundra on Earth. [19] 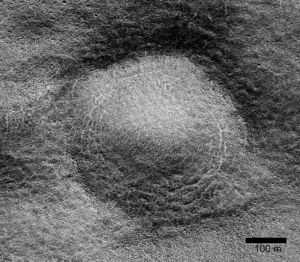 Close view of possible pingo with scale, as seen by HiRISE under HiWish program

Terra Sirenum is the location of many Martian gullies that may be due to recent flowing water. Some are found in the Gorgonum Chaos[20] [21] and in many craters near the large craters Copernicus and Newton Crater.[22] [23] Gullies occur on steep slopes, especially on the walls of craters. Gullies are believed to be relatively young because they have few, if any craters. Usually, each gully has an alcove, channel, and apron. Many theories have been proposed for the origin of gullies on Mars. Many involve flowing water. However, with more repeated observations it was found that gullies could form today when pieces of dry ice go down steep slopes. Furthermore, experiments on the Earth can duplicate gullies with pieces of dry ice moving down slopes. [24] In the distant past some water may have been involved with some gullies.[25]