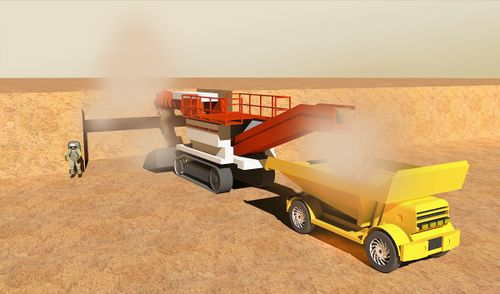 Mining is the process of collecting raw materials from the Martian natural resources for further processing. The raw materials extracted from the martian surface are frozen water, minerals and ore. The thin atmosphere can be exploited for resources by atmospheric mining.

Mining is an energy consuming activity. Due to the hostile environment, the digging machines are expected to be automated, or be remote controlled. However, in-situ resources are almost always less expensive than resources imported from Earth.

When resources are available close to the surface, a strip mine is the most efficient method of extraction. The layers of regolith covering the resource are taken away, and the exposed ore is mined. This method is also called open-pit mining, or regolith harvesting, depending on the depth of the work.

When the natural resource lies far underground, it is more efficient to dig tunnels to access the ore than to remove the overlaying rock and regolith. Since Mars has only about 38% as much gravity as Earth[1] people should be able to extend mines to a depth about 2.6 times as deep as on Earth without the tunnel collapsing from hydrostatic pressure. This should allow the search for valuable minerals to a depth of more than seven kilometers. There are many subsurface mining methods, and they are often used in conjunction with each other.

Vertical shafts are used in shaft mining. The shaft is often provide with an elevator system and used to access extended horizontal galleries.

Secondary use for mining galleries 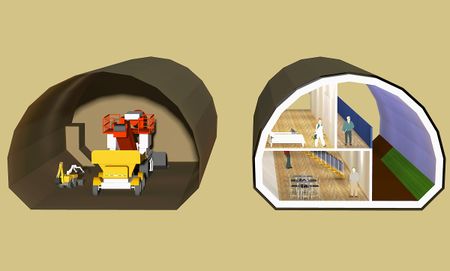 The artificial caves created by mining can be a valuable side effect of subsurface mining. They can be used to expand the settlement with storage rooms, living rooms, underground greenhouses, gas container for energy storage or for storage of chemicals.