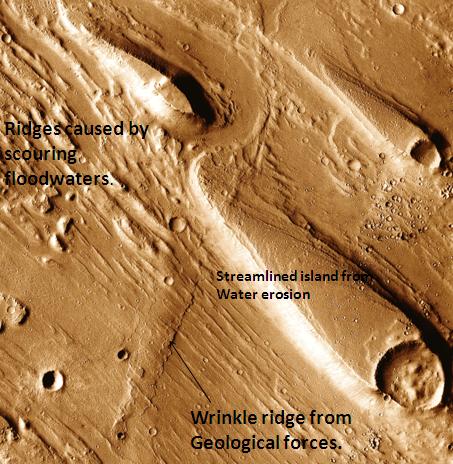 Ares Vallis (Mars Valley in Latin) is a large valley that appears to have been eroded by ancient flows of water. It is located in the Oxia Palus quadrangle, at 10.4N and 25.8 W (334.2 E). Ares Vallis connects the mountainous Margaritifer Terra with the Chryse Planitia delta. The valley passes through the ancient Xanthe Terra highlands. Ares was named after the Greek name for Mars, the god of war; it appears to have been carved by fluids, probably water.[1]

Ares Vallis was the chosen location for the 1996 Mars Pathfinder mission. The Sojourner rover explored the border of Ares Vallis with Chryse Planitia.

It has been argued that Uzboi Vallis, Ladon Valles, Margaritifer and Ares Valles, although now separated by large craters, once comprised a single outflow channel flowing north into Chryse Planitia.[2] The source of this outflow has been suggested as overflow from the Argyre Crater, which was filled to the brim as a lake by channels (Surius, Dzigai, and Palacopus Valles) draining down from the south pole. If real, the full length of this drainage system would be over 8000 km, the longest known drainage path in the solar system. This long path for water flow has been named the Uzboi-Landon-Morava (ULM) system. Water from this system may have helped to form Ares Vallis.[3] [4] [5] [6] [7]

A panorama of the Ares Vallis landing site of the Mars Pathfinder lander.